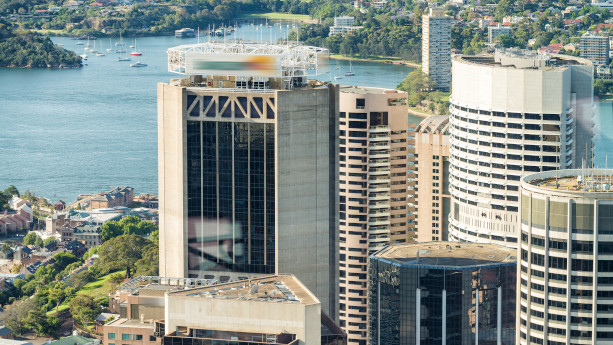 Investments in office space have accounted for around 80% of total investments by foreigners in the previous decade, with retail properties accounting for a bit more than 10%.

Around a quarter of investors in commercial real estate are foreigners.

While Sydney and Melbourne are considered some of the most important to the APAC economy, smaller cities like Hobart and Adelaide get increasingly more attention.

In this article, we review how you can invest in Australian office space and buildings.

Australia attracts many residential property investors and primarily in Melbourne, Sydney, and Brisbane. Recently, we’ve also seen a greater uptake in smaller cities like Hobart, the capital of Australia’s island state of Tasmania.

While non-resident foreigners only have access to new or off-plan housing, the commercial property market is less overheated.

You generally don’t have any issues to invest in office space and foreigners rarely get rejected by the Foreign Investment Review Board (FIRB) when approval is needed.

It’s still important that we review who and when you need the approval to invest in Australian office space though.

The government looks at the following items when determining whether FIRB has to approve the investment:

Typically, properties valued from AUD 0 – 1.154 billion need approval from the FIRB. The value depends on the four items mentioned above.

Worth mentioning is also that you need approval from FIRB if the land is vacant.

For more information, I recommend you read my separate guide that goes into greater detail about how you can invest in commercial real estate in Australia.

Australia’s property market was affected badly by the COVID-19 pandemic and vacancy rates increased to a 24-year high, which was also a result due to a push in supply.

The GDP growth and the demand for office space, decreased by -4% compared to a year earlier. The largest cities showed the following vacancy rates as of 2020 in addition to the changes in percent from the previous year:

Hobart had the lowest vacancy rates, hovering at a bit more than 5%. I will explain more about this upcoming city later in the article.

The Importance of Sydney and Melbourne to the APAC Economy

Sydney and Melbourne are the two biggest cities that have some of the most active office markets in the world.

While Sydney is considered one of the top ten world cities that are highly integrated into the global economy, Melbourne has a diverse economy including industries such as finance, manufacturing, research, and IT.

The central business districts get the most attention and 40 out of 43 Australia’s banks are located in Sydney, for instance. Examples include Bank of America, Citigroup, UBS, Bank of China, HSBC, Deutsche Bank, Barclays, and the People’s Bank of China.

As markets have been bashed on heavily, we will also see increased room for investment opportunities. An old proverb goes “the time to buy is when there’s blood in the streets”.

We see increasingly more activity in smaller cities as well when investors and residents move to less overheated and more cost-friendly markets with growth opportunities.

An upcoming trend that will continue growing is the demand for flexible workspace, including co-working spaces. These can help companies to reduce costs as well as increasing employees’ well-being.

Cities to Invest in Office Space

As you probably know by now, the biggest cities and most commercial activity can be found in the Southeastern and Eastern parts of Australia, namely Sydney, Canberra, Melbourne, and Brisbane.

As such, I will focus on these cities but also mention smaller upcoming cities that are worth having a look at. Let’s start with the city that receives the most attention and with the most active commercial real estate market.

Sydney is the financial hub of Australia and the home to the Australian Stock Exchange as well as the Reserve Bank of Australia. Multinationals also prefer Sydney when setting up regional headquarters.

While the central business district has the highest prices for office space, you can also find surrounding commercial areas with growth opportunities. One example is Parramatta, a commercial hub located just 24 kilometers away from Sydney.

Not only is Parramatta a major transport hub, but it’s also the home of one of the country’s biggest shopping malls.

North Sydney has higher vacancy rates on average and the central business district stretches to here. That said, it’s also known for having lower office prices on average.

Being located only around 3 km away from the Sydney CBD, North Sydney has modern office buildings and is the home of many multinationals, including Cisco, Hyundai, and more.

While Sydney is the country’s most expensive city to rent office space, prices are comparably low to other alpha cities globally. For instance, skyscraper rents in Hong Kong are more than three times as high and rents in New York are around 70% more expensive.

Melbourne has seen rapid growth and increased population growth as Australians relocate from Sydney. Property prices, as well as daily living costs, are to blame.

A similar trend as seen in Sydney is that workers move to suburbs in increasingly higher numbers. Australia is not the only country facing this, but also New York and London.

With new start-ups and hi-tech companies entering the market, we see a higher demand for high-quality assets and office space in hi-tech parks.

Places like Singapore, Hong Kong, Melbourne, and Sydney are predicted to perform well along with this trend.

Brisbane has become a popular option among real estate investors as prices have soared in Melbourne and Sydney. It serves as an important transportation hub and with the greatest economic output in the state of Queensland.

On contrary to Sydney and Melbourne, Brisbane is primarily the home of companies in healthcare, banking, insurance, transportation, information technology, and real estate.

While mining used to be one of its core industries, we’ve seen a shift to manufacturing and a more service-oriented economy since the mid-2000s.

If you look for lower real estate prices in Australia, Brisbane should be at the top of your list.

Perth is the state capital and the biggest city in Western Australia (WA), an enormous landmass that covers around 33% of Australia’s land area.

Being the fourth-most populous city, Perth is the most isolated city with Adelaide being 214 kilometers away, as the closest city. Both Denpasar and Melang in Indonesia are closer to Perth than Sydney and Melbourne.

If you look to invest in the Western parts of Australia, Perth will most likely be your only option. With that said, the city has significantly fewer high-rise buildings and office space compared to the Eastern Coast.

Canberra is the capital and the eighth-largest city in Australia. Having the lowest unemployment rates and the highest average level of disposable income in Australia, its economy is primarily driven by the following industries:

Canberra typically doesn’t receive as much attention as Melbourne and Sydney and doesn’t have as much commercial activity as the two.

Hobart is the state capital of Tasmania and has one of the fastest-growing real estate markets in the world. In 2019, this small city saw a 9.6% growth thanks to increased population growth and commercial activity.

Thanks to its cool climate, foreigners as well as Australians relocate to Hobart and invest in everything from hotels to office space.

The most important industries, in terms of the number of employees, include health care and social assistance, public administration and safety, education and training, accommodation and food services, retail trade, and professional, scientific, and technical services.

I hope you found this article interesting and useful. I also recommend you to read my separate articles that cover various topics in the Australian market, including: