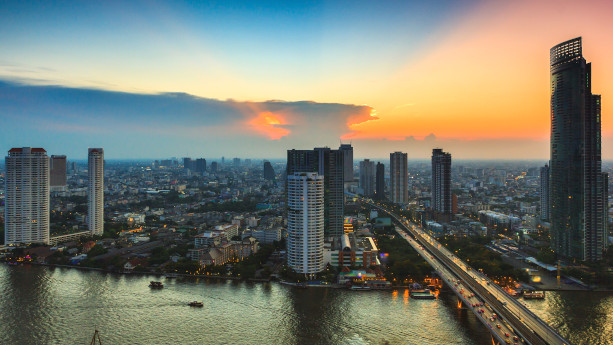 Bangkok is the most visited city in the world and attracted as many as 22.7 million travelers in 2019. Foreign investors have poured in, particularly from countries and regions like Hong Kong, mainland China, and Singapore, driving up prices.

If you have visited Bangkok a few times and aren’t sure about where you should buy real estate, you have come to the right place. In this article, we list the neighborhoods, the most interesting areas to buy, and finally, explain briefly about the most luxurious areas.

Bangkok is the home of dozens of neighborhoods that can be further broken down into smaller areas. Below you can find a partial list of the neighborhoods and that you can found on Wikipedia:

The areas we will focus on in this article are located in the central areas of Bangkok and include Sukhumvit, Pathum Wan, and Silom. Sukhumvit, in particular, attracts plenty of overseas investors who are bullish on the Thai market.

Over the years, other areas have started to gain more interest among property buyers.

While travelers and investors have targeted the most central areas, like Asoke, Thong Lor, and Phrom Phong, we see increased activity further away along the BTS lines.

Where should I buy property in Bangkok?

Below we have listed some of the best areas to buy real estate in Bangkok, depending on if you want to buy as an investor, for leisure purposes, or if you seek exclusivity.

Let’s start with one of the most sought after and famous locations in Bangkok.

Asoke is part of the CBD in Bangkok and thrives thanks to its importance as a transportation junction. It’s the home of the BTS/ MRT Mass Transit interchange, which increases the foot traffic and retailing opportunities.

Thanks to its strategic location, Asoke is the home to many multinationals’ head offices in the region. Yet, there are plenty of restaurants and cafes in abundance as well.

Despite being one of the most developed areas in Bangkok, Asoke continues to transform through various mixed-use developments, including the Singha Complex and The Parq on the Rama 4 section.

Well-known condominium projects that can be found here include:

With that said, prices are also among the highest here. Below you can find the average square meter prices for a few projects:

If you want to buy real estate in one of the most prestigious and sought-after areas in Bangkok, then Asoke should be at the top of your list.

Phrom Phon is located in proximity to Asoke and you can reach the area on foot. It’s primarily known for being one of the best locations to buy lifestyle properties, thanks to its more laid-back atmosphere compared to Asoke.

You can find plenty of bars, restaurants, but also Emporium, a luxury shopping mall located in Khlong Toei.

The area is one of the most popular shopping and leisure hubs with a wide selection of condominium projects.

Examples of projects in Phrom Phong include:

Over the years, property prices have increased by around 40% in Phrom Phong, which speaks for itself.

As Sukhumvit continues to be the most popular area among foreign buyers, Phrom Phong will undoubtedly be a great location for property buyers down the road.

On Nut is located next to Phra Khanong and has developed from being a somewhat sleepy neighborhood to becoming one of the most promising investment destinations.

A benefit of living in On Nut is that the neighborhood is tranquil and with many development opportunities. You won’t be far away from the city center that you’ll conveniently reach within 10-15 minutes by taking the BTS.

W-Market is a popular food market located in Phra Khanonh and with short walking distance of projects like The Base in On Nut.

Here, you’ll find both foreigners and locals that enjoy an easy night out or just continue to some of the more central districts later.

The area around On Nut BTS station is also worth visiting thanks to the many restaurants, supermarkets, and bars.

Ploenchit is the home of many foreign embassies and you’ll also find some of the most expensive land deals being signed here.

It offers a more peaceful and formal environment compared to the above-mentioned areas and is sometimes referred to as the embassy quarters. Yet, there are plenty of restaurants, a luxury mall, and bars here.

Not surprisingly, real estate prices are some of the highest in Bangkok here. At Noble Ploenchit, for example, the average price is around USD 9,500 (THB 295,000).

Ploenchit should be on your radar if you have a high budget and look for a more luxurious living environment.

Silom is located close to Sathorn, Bangkok’s financial district, and one of the oldest and most established parts. Multinationals such as JP Morgan and local banks like Bangkok Bank can all be found here.

Silom is truly in the upper-scale and prices set thereafter. It’s also one of the more established and older parts of central Bangkok.

Despite having plenty of restaurants, posh bars, and hotels, Silom is also known for lacking some of the local and cultural atmospheres that can be found around Sukhumvit.

That said, every area comes with benefits and disadvantages and Silom still makes it into this list.

The Most Premium Areas in Bangkok

A question many people ask is “Where do the rich live in Bangkok?”. The city is different from many Western cities in the sense that there can be great wealth disparities within small areas.

With that said, the following areas are the most expensive in terms of land prices and you can find a high concentration of wealthy people living here:

Sukhumvit has the highest concentration of bars, restaurants, malls, and other amenities, and real estate prices are particularly high in the following areas:

Thong Lor has become a particularly interesting area in the past years and where prices have skyrocketed. It’s not strange, as it offers a diverse segment of restaurants, bars, and resembles that of Soho in London.

What are the most expensive condominiums in Bangkok?

Condominium prices have escalated in Bangkok and units sometimes fetch hundreds of thousands of Thai Baht.

You can also find ultra-luxurious units that cost millions of US dollars. Below I’ve tried to capture some of the most notable ones.

98 Wireless is one of the most bespoke projects, built by Sansiri at the Ploenchit BTS station that I described above.

With the American embassy just around the corner, units cost around THB 685,000 per square meter and the most expensive unit up for sale cost is a duplex penthouse for THB 650 million baht.

The Residences at Mandarin Oriental Bangkok

There are numerous super luxurious facilities and amenities nearby, including The peninsula Bangkok and Millenium Hilton Hotel. It’s even said that a BTS Gold Line was built specifically for the project, even if some claim this is false.

Sansiri is also behind this luxurious project that is located in Thonglor. They built the project together with the famous designer Philip Starck and in collaboration with YOO studio.

The most expensive unit here is a penthouse with a size of 294 square meters and that cost THB 139 million, equaling a square-meter priced of THB 472 million.