Ho Chi Minh is the biggest city in Vietnam, having around 13 million people in the metropolitan area. Along with the rapid urbanization and as Ho Chi Minh expands, this number will inevitably increase over the years.

What makes Ho Chi Minh interesting is that some of its most central districts are less developed compared to those further away. District 4, for example, is one example of districts that have gotten a bad reputation and that is less developed than District 7, which is located further from the city center.

This is just one example that makes it more difficult for foreigners to decide where they should invest in property. In this article, I list some of the most interesting districts for property investments in Ho Chi Minh.

District 1 is the most central district, it’s also one of the smallest and the most expensive district in Ho Chi Minh. Here, you can find most of Ho Chi Minh’s high-rise buildings, corporations, and banks.

Even if prices have increased much over the years, District 1 will always be a sought-after place for well-off investors and corporations. Yields might not be as high compared to upcoming districts, like District 2 and 9, but you should definitely have a look at District 1 if you look for central properties.

Many renowned developers have built or are in the process of building highly acclaimed luxury projects here, including names like Alpha Hill, The Marq, and Vinhomes Golden River.

Most of the international real estate agents based in Ho Chi Minh have their offices in District 1, including Colliers International Vietnam, JLL Vietnam, and CBRE Vietnam.

District 1 is suitable if you want to live in the hustle and bustle and have a higher budget. 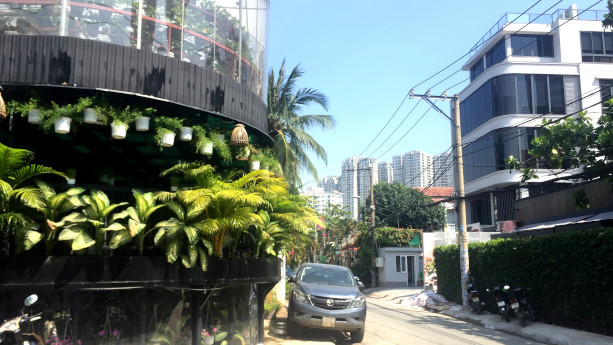 Binh Thanh is not as crowded and commercial as District 1. Still, it attracts plenty of foreign and local investors who like to live centrally, but a bit further away from the city center.

Binh Thanh is a vibrant district but has less commercial properties, infrastructure developments, and companies compared to District 1. That said, property is generally cheaper here and many foreigners decide to live in Binh Thanh thanks to its laidback atmosphere.

Another benefit of living in Binh Thanh is that you’re in between District 1 and the upcoming District 2. It’s a great place to live if you have to commute to District 2, 9, or even surrounding cities like Dong Nai or Bien Hoa.

You’ll notice that not that many developers target Binh Thanh for new property developments. But, there are a handful of projects that are interesting for buyers of established property, including City Garden and Vinhomes Central Park.

District 2 is one of the biggest and most popular districts among investors and overseas property developers, especially from Singapore. Mapletree, Keppel Land, CapitaLand, and Frasers Property are four large brands that have built, or currently build, new projects in District 2.

What makes District 2 interesting for property investments is that Ho Chi Minh expands towards the east and it’s located both close to the central and borders to District 9. The new Metro line 1 will also pass through here and reduce the traveling time significantly to the central districts.

District 2 is well-known for having one of the most popular expat areas in Ho Chi Minh as well, Thao Dien, which is a peninsula connected to Binh Thanh by a bridge. Thao Dien has a truly unique architecture and feeling with many posh villas, co-working spaces, trees, vegetation, restaurants, and bars.

Some of Thao Dien’s most acclaimed projects are The Ascent, Masteri, Tropic Garden, and d’Edge.

Another ward/area you should have a look at in District 2 is Thu Thiem. It’s set to grow significantly in the coming years as Keppel Land will build a massive project called Empire City here.

Imagine how Pudong used to look when it was a swamp some decades and how it completely transformed into becoming one of Asia’s most astonishing skylines. The Thu Thiem skyline might not be as magnificent as Pudong’s, but still impressive.

According to CBRE and local property experts, the real estate market in Eastern Ho Chi Minh (District 2 and District 9) will benefit greatly from the Ben Thanh – Suoi Tien Metro line 1.

We will see significantly more developments, both residential, infrastructure, and commercial, thanks to this new Metro line. This will most likely have a positive impact on property prices.

It’s estimated that properties located a 10-minute walk away from Metro stations will see price appreciations of around 10% to 20%.

District 4 is one of the smallest and most centrally located districts, wedged between District 1 and District 7. It’s also facing District 2 but separated by the river.

Despite its previously bad reputation, which still exists to some extent today, District 4 has comparatively low property prices and plenty of room for growth. From my point of view, it’s one of the most interesting districts in Ho Chi Minh.

In October 2019, CapitaLand bought a 14,474 square meter land plot for a value of USD 38.9 million. They plan to build apartments in the mid-range and luxury-segment on the land.

Some of the most interesting projects in District 4 include De La Sol, Millenium, and The Gold View. There are also many infrastructure projects planned for the district when developers move down to the riverside of Saigon.

As mentioned, it’s not ask crowded compared to District 1 and land prices lower.

District 7 was one of the first districts to develop and cater to the foreign population. It still remains as one of the most developed districts that can be characterized by its wide roads, more tranquil environment in many areas, expat community, restaurants, and bars.

District 7 is suitable if you’re ready to buy a more expensive unit but want instant rental income. This is not always the case in District 9, for example, where prices are low and the demand from tenants low as the district develops.

In addition to beautiful villas, you can find large-sized condominium projects in District 7, including Eco Green Saigon and Sunshine City.

District 9 is the biggest district in Ho Chi Minh and has undergone a transformation from mainly consisting of grass-lands to becoming one of the most important hi-tech and manufacturing hubs in Vietnam.

Numerous foreign and local multinationals have set up offices here, including Samsung, Intel, IBM, Jabil, and FPT. District 9 might not be the most popular district among residents and investors in Ho Chi Minh, but that will quickly change when the new Metro line is operational.

Besides, we see more and more large-sized condominium projects being built in District 9. One of the most notable projects is VinCity Grand Park. Located just next to Dong Nai River and close to the Hi-Tech Technology Industrial Park, VinCity Grand Park will have 50,000 condo units (!), 500 riverside villas, 500 commercial shophouses, and 1,200 townhouses.

Residents will also have access to numerous facilities and amenities like a Vinschool, Vinmec hospital, supermarkets, parks, and more.

More and more expats who commute to surrounding cities like Dong Nai, Bian Hoa, and Binh Duong find it convenient to live in District 9 as well. The district will become increasingly popular once the subway is up and running.