With one of the highest economic growths in SEA and landlocked by a number of other growing countries in the region, it will continue to grow over the years.

Still, it’s somewhat more difficult to invest in property, at least compared to a majority of its neighbors.

In this article, I explain the essentials you need to know when investing in Laos property, for example, about ownership regulations, taxes, where you should buy, and more.

Can foreigners buy property in Laos?

Buying property in Laos is not as easy compared to many of its neighboring countries.

You can buy and own physical structures (including houses).

This is how properties are often advertised: you simply buy a house with a leasehold agreement of the land that will cover you for a time period of up to 30 years, sometimes with an opportunity of renewal up to 99 years.

If you’re lucky, the property is built within an SEZ (Special Economic Zone) which gives you the right to lease the land for up to 75 years, straight away.

Problems when buying a strata-titled property

But there’s a crux for strata-titled properties (condos):

The problem lies within the fact that Laos don’t have a separate law on strata-titled property. Those are existing in all other countries in Southeast Asia.

Without a separate law on strata-titled property, there’s no clear separation of ownership of the land and the physical structure.

At the end of the day, the lessor of the land owns the physical structure as well.

So, when the lease period expires, the land and everything above it goes back to the lessor, unless the leasehold period is renewed. 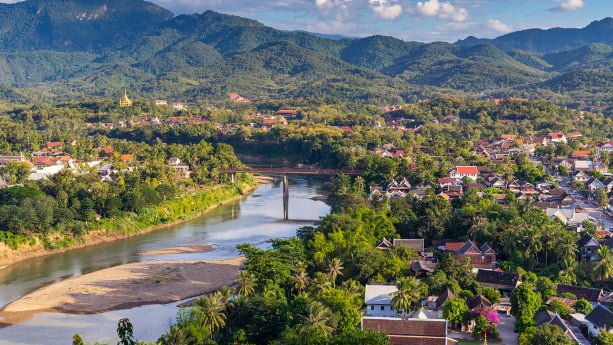 The same as it goes in Vietnam, all land is jointly owned by the people and controlled by the government. So neither can you legally buy and own land as a foreigner, Laotians deal with the same issue.

Locals can obtain ‘Land Use rights’ whatsoever, which is closer to freehold ownership, at least compared to leasehold ditto.

As a foreigner, you only have the option to lease land. This can be done in two ways:

a. Leasing from the Lao PDR (government)

b. Leasing from a Lao citizen

Even if leasehold is the only option, some foreigners decide to set up a contract with a Lao citizen as the nominee, to indirectly get access to the Land Use rights, which are more useful and precious.

A clause should normally be added, stating that the foreigner will get all rights of full ownership, once (or should I say if) the regulations to ownership changes in the future.

Foreigners have helped to drive up prices, speculation is a main reason, this is something we’ve seen in Sihanoukville (Cambodia) as well.

A big chunk of the buyers comes from China, followed by Vietnamese, Koreans and Westerners. Not only do investors buy in Laos, to profit from price appreciations, but the quality of life offered in combination with low prices has also attracted many retirees.

Buying a plot of land, just keeping it for a decade or two and later building a house, when the time comes, is a strategy heard elsewhere, for example in Da Nang.

Not only will you secure a plot of land, but you’ll also enjoy a decent price appreciation over such a long period of time.

With investment in infrastructure, for example the Laos-China railway project that will link together Yunnan with Vientiane, will help to boost the economy significantly.

Laos economy and market is bullish, but not overheated

Laos economy is doing very well, in fact, it’s outgrown many of its neighbors and has averaged at a growth of almost 8%, year after year. We’ve heard little about this in the media, as other regional countries get more attention.

The land has abundant natural resources, something that China and Vietnam want to grab a piece of as well, not surprisingly, investment pours in.

Worth mentioning is that regulations in neighboring countries have an impact on the Laos property market, especially those in China and Vietnam.

Not only has price increases slowed down a bit as the Laos government wants to keep the market healthy, being less generous with housing loans.

Stricter regulations to obtain housing loans in China and Vietnam have also been a contributor to slower price increases.

Where should I buy property?

It’s not always easy to know where to invest in a developing country like Laos. Capitals are always of interest for sure, but there are also a couple of other cities that you should have a look at.

Vientiane is the capital and where most economic activity is going on. It’s also the city that will be directly connected through a new railway, stretching from China, all the way to Bangkok.

The population is the fastest growing for any capital in the region and will increase by 50% from 2015-2025.

In Vientiane, prices range from around USD 800-1000 per square meter for houses.

Compared to other major cities, Pakse is located in the Southern parts. It’s the capital of the province Champasak and the second biggest city in Laos in terms of population.

If Vientiane is the hub in Northern Laos, then Pakse is definitely the Southern’s. Further connectivity is planned with a new highway being built between Pakse with Vientiane, that will have a direct impact to the economy.

Luang Prabang, located in the Northern parts, is a developing city with a population of around 60,000 people. It’s sometimes referred to as being “the Heart of Laotian culture”.

Listed by UNESCO as a world heritage in 1995, it has many ancient artifacts, a beautiful nature, and attracts many backpackers and tourists.

House prices in Pakse range from USD 800-1000 per square meter on average.

Below I’ve included some of the most common taxes you need to pay when buying, holding, or selling property in Laos.

Be sure to consult with a local solicitor as tax rates can change depending on the property type, where you buy, and the value.

You need to pay a stamp duty of LAK 20,000 (ca 2.5 USD) to change the information in the Land Register. You should pay the amount when the SPA and land sale agreement is registered.

Calculated based on the sales price and differs depending on the type of property. Normally set to 1%.

The rental income tax for leased land and buildings is 15%.

I recommend that you contact a real estate agency that has a proven track record of helping foreign clients. This will reduce risks when buying a property, as they know how to cater foreigners, and are aware of foreign ownership regulations.

Some of the most popular real estate agents in Laos are:

I suggest that you try to contact other foreigners who have been in contact with and got help from any of the agencies before. They might also have other valuable tips.

The same as for Cambodia, many companies invest in Laos and need housing for their expats. Tourists also visit Laos and plan to stay there for a couple of weeks or more.

Some retirees think that the buying process is simply too complicated and decide to lease property.

To find a property with sufficient standard is not always easy in Laos, some claim that around 25% of the properties that are put up for lease to cater to foreigners are “livable”.

This has resulted in a greater demand for rental property, hence the rental yields are pretty good. You need to pay almost USD 1000 on average to rent a 3 bedroom house in the central areas, which is comparably high.

Laos economy is one of the fastest-growing in Southeast Asia. A lot of other countries invest much in Laos, China and Vietnam are two big contributors.

It’s not strange as Laos is sparsely populated, has many natural resources, and is landlocked between a number of growing countries. This puts Laos in a great position for investment, to improve trade routes between the countries.

Regulations to foreign ownership are still not very clear and transparent whatsoever, compared to neighboring countries. This is one main reason why many foreigners have got turned off to invest in Laos.

The property market performs well and is still bullish, albeit relying much on foreign investment and the economic climate in neighboring countries.