Vietnam is on the rise and opened up to foreign investors as late as 2015.

The government made big changes to foreign property ownership regulations, nowadays, you can buy multiple condominium units by simply having a tourist visa.

Looking at cities, the most popular investment destination is Ho Chi Minh City, the biggest city in terms of population and economic output. This metropolis is the second-fastest-growing city in the world at the moment.

In this article, we take a closer look at how it works when buying apartments as a foreigner in Ho Chi Minh City.

Foreign Ownership of Property in Vietnam

The same as it goes in many other Southeast Asian countries, like Thailand, foreigners can’t own land in Vietnam.

These countries rely much on the agricultural industry and giving foreigners full ownership of land could seriously disrupt the economies. This is something that governments want to avoid of course.

Instead, all land is jointly owned by “the people” in Vietnam and you’re able to lease land with an initial leasehold period of 50 years, with a possibility to renew the lease for additionally 50 years as of 2020.

Hopefully, we’ll see even more changes and relaxations to foreign ownership of property in the coming years. Vietnam is heading in the right direction for sure.

Below I’ve summarized the key points you should know about Vietnam’s new law on foreign ownership of property (introduced in 2015): 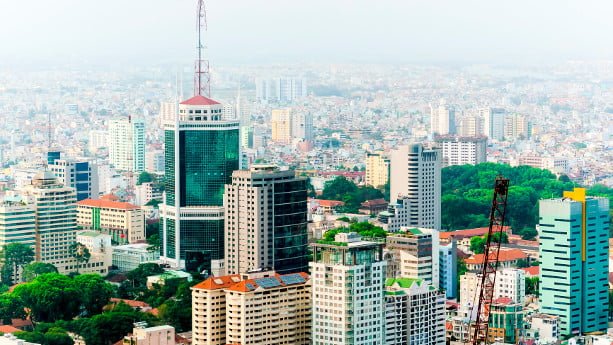 The property market has grown massively since 2013 and many local property owners have managed to accumulate a significant amount of wealth.

A growing economy, higher disposable incomes, bigger interest from foreign buyers, and reduced mortgage rates are just a number of reasons why the real estate market has exploded.

Ho Chi Minh’s luxury property market is particularly interesting and one of the most frequently mentioned in the media. Yet, real estate can still be bought for a fraction compared to many other places in the region, like Hong Kong, Singapore, Taiwan, and Korea.

There are plenty of reasons why Ho Chi Minh City is one of the best places to buy real estate in Southeast Asia at the moment. For more information, I recommend you reading my separate article that lists some of the main benefits of buying real estate in Ho Chi Minh.

Ho Chi Minh City offers some of the highest rental yields in Asia, with rates stretching up to 6% – 8% in places like District 2.

With the new metro finished sometimes after 2020, you can expect great capital appreciations and yields for apartments located close to the new metro stations. Have a close look at places like District 2 and District 9 where there is still plenty of room for growth.

Metro Star, for example, is a project that will be integrated with the new metro line in district 9. It’s sold for as little as USD 1,500 per square meter, at the moment I’m writing this article.

According to CBRE who operates in Ho Chi Minh, properties located 10 minutes walking distance from the metro stations will see price appreciations of 10% – 20% when the metro is finished. 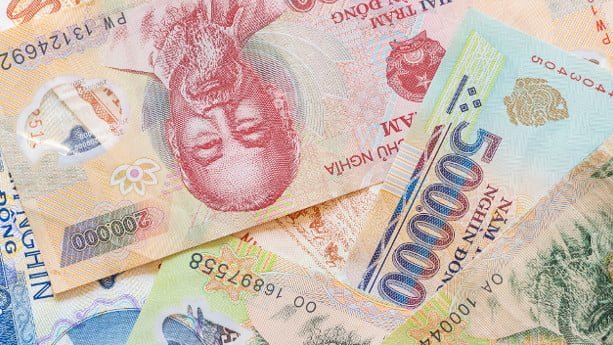 Ho Chi Minh City has low real estate prices in Asia on average and is only outperformed by Cambodia (Phnom Penh) and Indonesia (Jakarta).

The luxury property market is probably the most interesting in Ho Chi Minh at the moment.

Prices grew as much as 18% in 2018 and we’ve seen a big demand from both wealthy locals and foreign buyers.

Interestingly, Novaland, which is a local developer, accounts for around 25% of the new luxury projects. Still, there are plenty of foreign developers, like Mapletree and CapitaLand, that have many new projects in the pipeline.

If you plan to buy luxury real estate, be sure that you work with a reputable agent, to assure you get the paperwork right.

According to Bloomberg, a high-end unit averages at USD 45,500 per square meter in Hong Kong. In Ho Chi Minh, prices average at USD 3,800.

Buying a 150 square meter high-end unit in Hong Kong would cost us almost USD 7 million, while the price would be USD 570,000 in Ho Chi Minh. Now that speaks for itself.

It’s crucial that you find an experienced agent before you engage in the real estate market. This is especially the case for new and off-plan projects, which foreigners are generally allowed to buy.

Some of the biggest real estate agents and listing websites in Ho Chi Minh are:

The websites are easy to navigate and you can search for property in your preferred areas.

Ho Chi Minh is divided into 25 districts where some of the most well-known are District 1, Binh Thanh, District 2, and District 3. There are also a handful of districts with specific names, like Binh Tanh.

Let’s have a look at some of the most interesting districts for property investments in Ho Chi Minh at the moment. 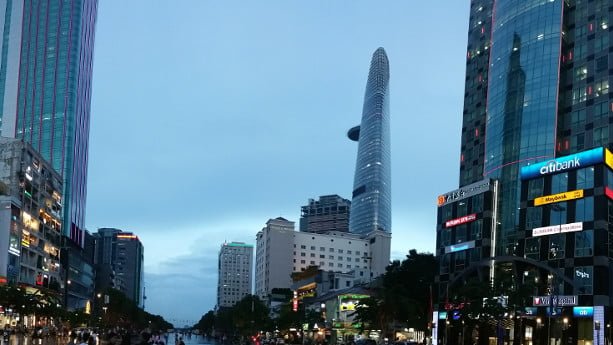 District 1 is the most centrally located district and you’ll notice that many foreigners and expats spend much time in this area. It’s the commercial center and also the most expensive area to buy property.

Here, you’ll find many of the main attractions, such as the Notre-Dame Basilica, the old post office, two of the city’s most famous landmarks.

Other famous attractions include the Theatre, the Bitexco financial tower (with a helicopter pad that looks like a lip), and Ho Chi Minh City hall.

Property prices are higher in District 2, but you can also expect great price appreciations in the long-term. District 1 will always be attractive and is a preferred choice among wealthy buyers. 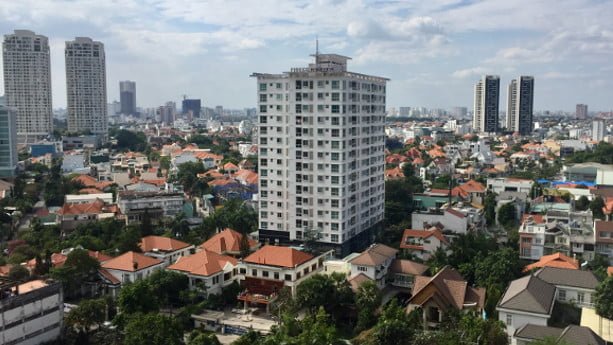 District 2, and especially Thao Dien, are some of the most popular areas for many Korean and Western expats. It has a high-end and family-friendly touch.

In comparison with Shanghai, District 2 resembles Pudong much, which is located on the other side of the Huangpu River. Pudong was quickly developed during a time period as short as a decade.

District 2 have many international schools, like the British school, and many expats hang around in this area.

Interestingly, District 2 suffered from poverty not a long time ago. One reason is that it’s cut off and located on the eastern side of the river (again, similar to Pudong in Shanghai).

Previously being one of the poorest areas in Saigon, district 2 is being heavily developed with new infrastructure, schools, and hospitals. Bars and restaurants are popping up here and there, at the same time, you see new condo projects being built.

Some predict that District 2 will reach similar standards as some of the most developed cities in Asia. 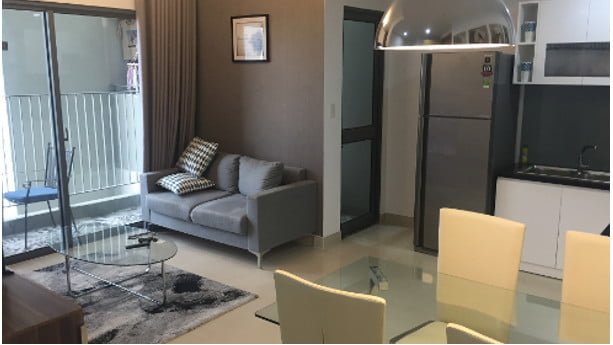 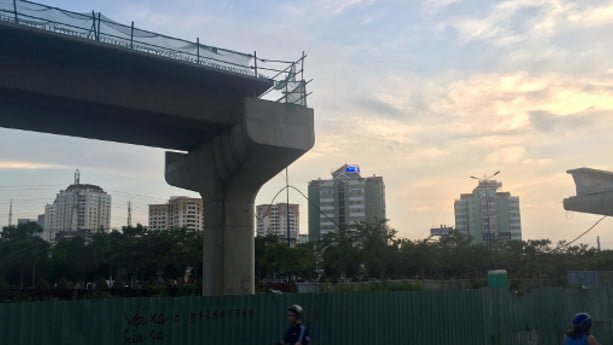 Getting from District 2 to other districts

If you live in District 2, you’ll often take a cab through the Thu Thiem tunnel that connects it with District 1. You also have the option to cross the Thu Thiem bridge, arriving in the Bin Tanh district.

But improvements are on the way and you’ll find it remarkably easier to travel from District 2 to District 1, once the new metro line opens in 2020, that will connect both sides. 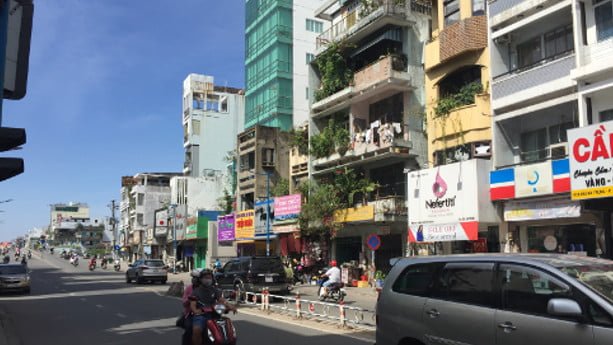 You might think that District 3 is located farther away from District 1 than District 2, that’s not the case.

While District 1 hosts many of the tourist attractions mentioned, many foreigners prefer to stay in District 3. This includes everything from young people, expats, and families, who want to live in a more “bustling” area.

While District 2 is more low-rise with many beautiful villas, serviced apartments, embassies, and malls, you’ll be sure to find colonial French style properties, coffee shops, and bars in District 3.

In the past decades, District 4 had a somewhat bad reputation as it’s been the base for many local criminal activities. People even avoided going to the district unless they really had to.

That said, the district has a strategic location as it’s wedged between some of the city’s most developed and commercial districts, including District 1 and 7. Besides, across the river, it faces the upcoming Thu Thiem area, which resembles Pudong in Shanghai in the early ’90s.

Real estate prices are still comparably cheap in District 4, but that will soon change as developers realize the area’s potential. CapitaLand, one of the biggest developers in Singapore, has acquired a huge land plot at a price of almost USD 40 billion here to be used for development purposes.

If you plan to invest in Ho Chi Minh, you should keep an eye on District 4 as some claim that it will become a new District 1.

District 5 is located southwest of District 1 and 3 and is the home of its Chinese community.

If you want to enjoy Chinese food, live close to the temples, and buy a more affordable apartment, District 5 should be at the top of your list.

District 5 is still fairly central and more affordable compared to District 1 and 2.

Many expats choose to live in District 7 to escape the congested areas of central Saigon.

With golf courses, Western restaurants, and bigger, greener areas, this area might suit you better if you have a family and will reside in Ho Chi Minh during a longer period. There are also plenty of international schools and private hospitals here.

The same as it goes with District 2, people believe that District 7 will increase in popularity and attract more foreigners, as it’s foreign-friendly.

Being the biggest district in Ho Chi Minh and located farthest to the East, District 9 is not as developed compared to the other districts. You’ll mainly find large manufacturing facilities, offices of multinational companies, a few residential projects, and undeveloped land here.

What makes District 9 interesting for property investments are the low property prices, the future plans to expand Ho Chi Minh towards the East, and its proximity to surrounding manufacturing hubs like Bien Hoa and Dong Nai.

Nowadays, many expats commute to District 9, Bien Hoa, and Dong Nai. But with the new Metro Line 1 soon to be finalized, upcoming residential developments, and much office space, District 9 will become one of the most interesting districts in the coming decade from my point of view.

There are still a few residential developments completed here, but there are many in the pipeline.

Ho Chi Minh is the home to many international real estate developers that have a long track record of building apartment complexes overseas.

Capitaland is the company I like personally the most and that has built several modern and unique high-quality projects in the city, including brands like Feliz en Vista, Vista Verde, The Vista, and d’Edge.

It can be worthwhile working with an international and reputable developer as the quality is often superior. The design and locations of the projects are also best-in-class.

Below I have included some commonly asked questions and our replies.

No, foreigners are not allowed to buy land in Vietnam. The land is collectively owned by the Vietnamese people and controlled by the government.

Foreign companies can acquire commercial real estate in Vietnam by setting up local real estate trading companies or joint-ventures with local entities. Foreign individuals generally buy units in condominium projects, in case the foreign-ownership quota of 30% is not filled.

Can Singaporeans buy property in Vietnam?

Yes, Singaporean nationals are not treated in a different way than other nationalities when buying property in Vietnam.