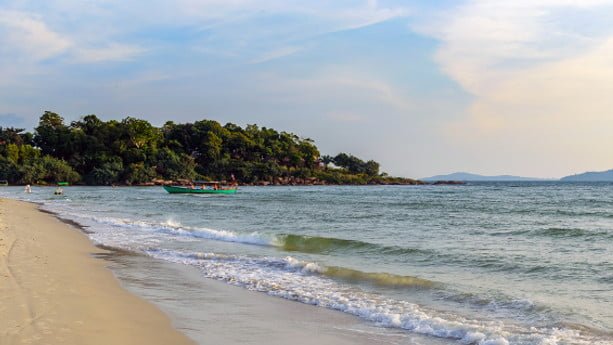 Sihanoukville has grown rapidly the past years and now attracts a big amount of investors and tourists.

Previously a sleepy tourist destination that was infamously known for attracting Western foreigners who were partying a bit too hard, it’s now attracting casino visitors, people enjoying its beach resorts, investors, and more.

Not to neglect, except for tourism, it’s also engaged in a number of other industries like textile, manufacturing, and agriculture.

In this article, I explain the opportunities to buy land in Sihanoukville.

Much investment pours in to build condos, casinos, and other property that will help to cater to more visitors, mainly from China but also locals.

Yes, the Chinese are taking over the property market in Sihanoukville.

Just listen to this:

Previously, Western companies made up 75% of all investments in Sihanoukville. Nowadays, an almost equally big share of investment is covered by the Chinese – alone.

Locals are even afraid that the Chinese will take over the real estate market completely, making Sihanoukville into a “Chinatown”.

Is Sihanoukville’s property market in a bubble?

Some believe that the city has grown too fast and that it’s currently in a bubbly phase, facing stagnation in property prices. In fact, land prices have doubled in some places, or quadrupled in others, over a time period as short as one year.

Speculation has been one of the main drivers of price increases.

So: the real estate market in Sihanoukville might be in a bubbly phase and see a stagnation in property prices in the coming time.

But as long as the city can attract the right visitors, not only staying short term, and continue to see increased investments, its potentials are predicted to grow much in the long term, even outpacing Siem Reap in economic terms.

Can foreigners buy land in Cambodia?

But even if foreigners buy land to keep as investments, you can’t own land in your name, due to Cambodian ownership regulations on foreigners.

Simply: foreigners either buy land through contractual setups locally and own the land indirectly, or lease the land over a period of up to 50 years.

In total, you can buy land in four different ways:

I won’t go into detail for each one, instead, I recommend you to read my separate guide that explains how foreigners can buy property and land in Cambodia and what regulations apply to foreign ownership.

What type of land can I buy as a foreigner?

Land is sought after among foreign investors. It’s not strange as Cambodia has great growth potentials and prices have been kept very low.

Land can even be bought for as little as a couple of US dollars per square meter. But prices vary depending on the type of land you want to buy and its location, of course.

In total there are 4 different land types you should know about, let’s have a look at each one of them.

Coastal land is the most sought-after land type as Sihanoukville relies heavily on tourism. Not surprisingly, the coastal areas are the prime spots for property developers.

Coastal land should also be your preferred choice if you plan to build a beach villa or bungalow for example.

Prices stretches between USD 450 – 2500 per square meter, depending on location. Cheaper land can be found in less populated areas.

Downtown land is the second most expensive land type, you can find this in the city centers, including land used for commercial property.

Stretches between USD 200 – 750 per square meter, depending on location.

Residential land is cheaper compared to Downtown land and Coastal land, this land type is not used for commercial purposes and generally found in less busy areas.

Stretches between USD 120 – 300 per square meter, depending on location.

Agricultural land is the cheapest land type, it’s generally harder to develop and use this land. It’s also farther away from urban areas, compared to the other land types mentioned.

As explained in my article about buying land in Malaysia, it can be better to find land that’s located closer to urban areas, or areas that attract many tourists, with access to electricity and water.

This is not always the case with agricultural land, especially not in a developing country like Cambodia.

It starts from a couple of dollars and continues upwards.

As mentioned, it’s important that you find a reputable real estate agent before you engage in the Cambodian property market.

Some of the biggest and most popular real estate companies include:

You can also turn to national real estate agents who operate from other cities in Cambodia.

Sihanoukville has transformed from being a sleepy destination attracting many backpackers to a place where investment pours in to build casinos, condos, and resorts.

Prices have increased much in the past years, mainly due to a big influx of Mainland Chinese. Open policy for foreigners and friendly relations between China and Cambodia are some of the main reasons.

If you want to buy land in Cambodia, you have four different land types to choose between:

Many believe that the property market is in a bubble as land prices have doubled, or even quadrupled, over periods of a year. Sihanoukville is still predicted to perform well over the long term, it just needs to attract the right visitors and investors in the coming years.