Da Nang is one of the biggest cities in Vietnam that attracts plenty of local and foreign property investors. It’s leading the industrialization of the central parts of Vietnam and welcomes millions of tourists each year.

In this article, we review what makes Da Nang interesting for property investments and why it might be the right choice for you.

The following topics are covered:

Why should I invest in Da Nang?

With a bit more than 900,000 people, Da Nang is the fifth-largest city in terms of population and one of the most developed cities in Vietnam.

It faces the beautiful South China Sea and is located right in between the capital, Hanoi, and the southern metropolis, Ho Chi Minh. Here, you’ll be able to enjoy comfortable weather all year round with more vegetation and outdoor activities compared to the bigger cities.

Compared to many other resort-destinations, such as Phuket in Thailand, the city doesn’t only rely on tourism but has much commercial activity. Many local and foreign companies set up offices here, especially in the hi-tech and maritime industries.

The central parts of Vietnam experience a rapid industrialization and Da Nang is undoubtedly the epicenter of this transformation. Along with this economic growth, we see dozens of new resorts, office buildings, and hotels being built in the city.

Still, property prices and general living costs are below those in Ho Chi Minh, making Da Nang a preferred choice among retirees and entrepreneurs who want to buy cheaper condo units or set up a local office.

Da Nang will change significantly in the coming years and early investors can reap the greatest yields.

If you ever visit Vietnam, you’ll come across people who recommend you to visit Hoi An, one of Vietnam’s oldest cities. It’s the home of French colonial buildings, Chinese shophouses, and a center for spice trade.

Since 1999, the whole city has been inscribed as a UNESCO World Heritage site, which speaks for itself. The beauty of living in Da Nang is that Hoi An is located merely a 45-minute drive away and boosting tourism.

If you want to visit Hoi An, you have to land in Da Nang and most people usually spend some nights here before continuing to Hoi An. We also see increased connectivity between the cities as developers build resorts in between the cities.

On top of that, the old historical capital of Vietnam, Hue, is located a 2-hour drive away from Da Nang.

Where should I buy property in Da Nang? 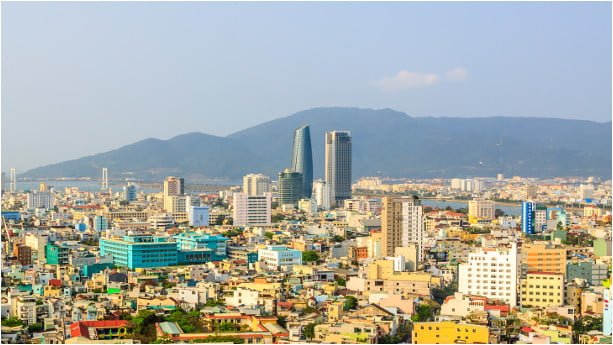 Da Nang is split up by a river called the Han River, there’s a Western and an Eastern side of the city.

My suggestion is that you visit Da Nang to see which area suits you the most. Da Nang is still relatively small and you’ll have no problems getting around in the city, no matter on which side you decide to buy property.

In short, the Western side of the city is more bustling and offers more cafés, shops, and diners compared to the Eastern side.

Here, you can find property that is centrally located and luxury condos just nearby the river. At the same time, you’ll reach the beaches on the Eastern side with a 10-minute drive, as these are only 2 kilometers away.

The Eastern side is located on the right-hand side of the river, offering beautiful beaches and sceneries of the ocean. This is the place where people can find large beach houses and experience a more relaxed atmosphere.

If you want to live closer to the locals and beaches, the Eastern side is the place to be. This is also the place to target if you look for a landed house.

You’ll find most villas for sale on the Eastern side of the city and along the coast or the river, stretching to Hoi An.

That said, units in projects like Le Meridien Resort start from as much as USD 1.5 million. Many foreigners get surprised by the high prices offered for branded luxury villas. If buying a villa is beyond your budget, you’d better look for a condo unit instead, which is the most popular option among foreigners.

Keep in mind that buying a villa is a different undertaking to buying a condo. Therefore, you should find a credible agent that can help you through the screening and buying process.

You’ll be surprised that some agencies have foreign founders or agents that will be ready to help you find a property. However, this is not as prevalent as in cities like Bangkok or Phuket.

Some of the biggest and most popular listing sites in the city are:

While beach houses and luxury villas can sell for as much as USD 1 million, you can buy condo units for lower prices. Due to the influx of local and foreign investors, condo prices have increased much in Da Nang recently.

As Vietnam has opened up to foreign investors, you’re able to buy as many condo units as you want as long as the total occupancy rate of foreigners in an apartment building is less than 30%.

No, foreigners cannot buy land in Vietnam as it’s owned by the Vietnamese people and controlled by the government.

Foreign individuals cannot buy commercial property in Vietnam. To do so, you have to set up a local real estate trading company or a joint-venture with a local partner.

Prices have increased much in the past years and property is considered expensive by national standards. This is especially the case for branded villas and condominiums located along the shoreline.