Hanoi is the capital of one of the fastest-growing countries in the world and has some of the highest rental yields in Asia at the moment. The city has seen rapid economic growth in the past years and is projected to continue on this path in the coming decade.

Even if Hanoi receives less attention than Ho Chi Minh, some investors simply prefer its local and authentic culture, seasons, and beautiful surrounding nature. Besides, the property market is less overheated than Ho Chi Minh’s and has much to offer in the coming years.

Hanoi is the second-biggest city in Vietnam and receives less attention than the southern commercial hub and metropolis, Ho Chi Minh City. The cities are different in the sense that Hanoi is the cultural and political center of Vietnam.

In a way, it’s like comparing Beijing and Shanghai in China.

Even if Ho Chi Minh City receives much investment in the IT, pharmaceutical, and manufacturing industries, Hanoi is the home of most foreign embassies and where political decisions are made on a national level.

That said, Hanoi receives a fair amount of investments. As of 2020, Samsung employed more than 200,000 in Hanoi, and Vinfast, Vietnam’s first car brand, has its head office in Hai Phong, located just 120 kilometers away.

Ho Chi Minh City attracts more expats and property investors for sure, but the market is also more overheated and property prices higher.

The average sales price of apartments is just a bit more than USD 1,400 in Hanoi and almost 30% lower than that of Ho Chi Minh. We’ve seen “modest” year-on-year price increases at around 7%.

Yet, this is far off that of Ho Chi Minh’s where prices have increased more than 20% year on year.

Looking at new projects, developers primarily target the Western areas of Hanoi (like Yen Hoa and Trung Hoa) as the central areas have become crowded and the government plans to relocate offices.

Villas and Terraced Houses are Popular in Hanoi

Villas and terraced houses in the urban areas are popular options for locals (and expats) in Hanoi, whilst foreigners find an interest in condominiums or condotels.

With rental yields that are a couple of percent higher than in Bangkok, Singapore and Hong Kong, it can be a wise choice to buy a unit in a condotel, for rental incomes.

You should also bear in mind that foreigners cannot own land, which is collectively owned by the people. This makes a purchase of a landed house more difficult compared to buying one or more units in a condo or condotel.

But you need to be cautious.

Even if Vietnam has opened up to foreign property investors since 2015,, many have stumbled upon issues that can leave anyone frustrated.

Not long ago, buyers were rejected to receive their certificates of ownership, after they purchased property.

Which areas grow the most in Hanoi at the moment? 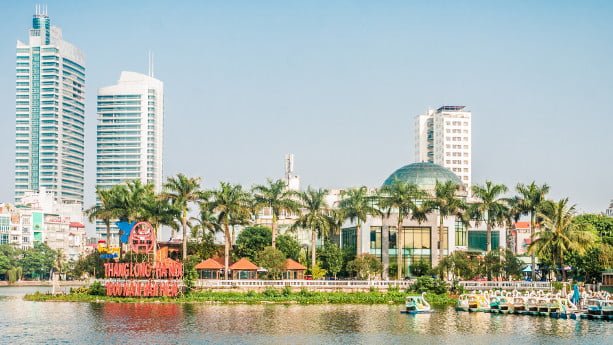 The Western and Southwestern parts of Hanoi have seen increased activity recently, mainly thanks to investments in infrastructure and a subway that will be ready sometime after 2020.

You can make great deals if you find properties that are strategically located close to junction points, subway stations, or train stations. Look at city planning and see where future investments and construction are planned.

Your real estate agent should also be able to give you advice regarding the most interesting areas.

As mentioned, property investments in the Western and Southwestern parts can earn you great yields as massive infrastructure projects are planned there.

Let’s have a look at some of the fastest-growing areas and where property developers plan to construct new projects in the coming years.

Tay Ho is located close to the Red River and is considered to be a high-end area. Although it’s fairly relaxed, you’ll not have any problems getting downtown within a short distance.

There are many beautiful parks and green areas, making it a good choice for expats and families that decide to live here.

Not surprisingly, properties and land plots are some of the most expensive here, but it’s also one of the most livable places in Hanoi.

Much investment is planned in real estate and education facilities here, just to mention a couple. You’ll find the second-tallest building in Vietnam in Cau Giay, the so-called Keangnam Hanoi Landmark Tower.

The area has many universities, like the National University, that attract many of the country’s top-performing students.

Cau Giay is fairly more developed and doesn’t have as many colonial buildings as the central parts of Hanoi.

Previously being a separate city, Ha Dong merged with Hanoi to become one of its bigger districts.

Ha Dong was one of the focus areas for property buyers previously, the area experienced falling prices when the property bubble burst in Vietnam some years ago.

Again, the city is catching up and many new projects are planned here. If you plan to buy an off-plan property, Ha Dong might be your place.

You’ll find many schools, hospitals, and other good infrastructure in Ha Dong. It’s the home to many wealthy people in Hanoi.

Thanh Xuan is located to the South of Tay Ho and Cau Giay. It’s a newly developed area that sees much potential in the coming years.

More affordable housing is planned in Thanh Xuan, and not to neglect, in Ha Dong.

You should have a look at Thanh Xuan if you want to buy cheaper property, with profit potential in the coming years.

If you’re Japanese, Nam Tu Liem might be your choice, as the Japanese school is located here. Many property developers have initiated new projects in Nam Tu Liem recently.

Tu Liem is often mentioned in the media and will become one of the hot spots for property buyers the coming future.

You must find a credible real estate agent that helps you with consultancy, to select a property, and that guides you through the buying process.

As mentioned, Vietnam recently opened up to foreign investors and foreigners have experienced issues receiving their certificates of ownership.

Even if locals tend to buy property word of mouth, this shouldn’t be your option as a foreigner. Some of the most popular real estate agents in Hanoi are:

Do your research thoroughly and find a real estate agent that has helped foreigners before and that’s capable of speaking English.

How many apartments can I buy in Hanoi?

As of 2015, there’s no cap to the number of units a foreigner can buy in Hanoi. However, you need to make sure that the foreign ownership quota of 30% isn’t filled.

Can foreigners buy land in Hanoi?

Foreigners cannot buy land in Hanoi as it’s collectively owned by all the people and controlled by the government. Malaysia and Singapore are the only two countries in Southeast Asia where foreigners can buy land.

Can I buy freehold property in Hanoi?

No, freehold property is not available to foreigners in Vietnam. You can buy leasehold property with an initial term of 50 years and with a possibility to renew for 50 years more.

Hanoi is on the rise as the political center and capital of Vietnam. It’s the cultural and political city of Vietnam and attracts a fair amount of local and foreign investors.

The Western and Southwestern have seen big growth recently and more developments are projected for the future here.

Hanoi will have its subway ready after 2020, making the potential price appreciations even higher.