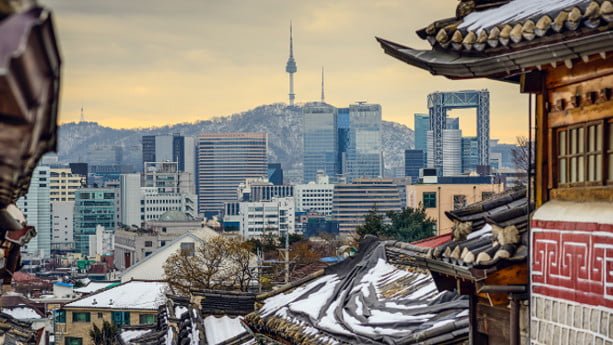 Seoul is the home for half of South Korea’s population and has developed to become an alpha city worldwide.

I’ve already explained Korea’s astonishing growth in separate articles. In the 1970s, it had the same GDP per capita as Thailand and the Philippines but is now one of the most developed countries in the world.

Not surprisingly, Seoul gets most of the attention and where foreigners and locals are most willing to invest in real estate.

With that said, you must get your feet to learn about local buying regulations, the property market, the best districts to buy real estate before you engage in the market.

Seoul is, together with Jeju Island, the most popular option to buy residential property in South Korea.

Ranked as number one in Bloomberg’s Global Innovation Index ranking, and named as the “Best International Business Meeting Destination” by Business Traveler, Seoul will continue to thrive with increased economic growth.

In recent years, the city has seen great property price increases that have been fueled by both local and foreign demand. As a result, the government has imposed new regulations to cool down the market.

With more than 20 cooling policies introduced by President Moon Jae-in’s government, home prices have increased by more than 50% since 2017. That’s some of the biggest increases in the world.

It’s even gone so far that some people quit their jobs to improve their chances of getting a property, according to Reuters.

Worth mentioning is also that the number of foreigners in South Korea has doubled in just one decade. This has further driven the demand and resulted in skyrocketing prices.

There are more than 2 million foreigners (almost 4% of the total population) currently living in South Korea, most of them in Seoul.

South Korea is among the countries where the population growth rate is low, despite not being as serious as Japan’s in the long-run.

It’s expected that the number of foreigners will even surpass 3 million soon, making foreigners around 6% of the total population. The increase of foreigners, along with a large middle class, drives the property market in cities like Seoul.

Although there’s an influx of foreigners and investment, mainly in the commercial sector in the last few years, the recent tax increase and stricter lending laws have curbed the growth.

According to Korea Center for International Finance, there’s an oversupply of residential units that will increase the downward pressure on the housing market. Another report by Credit Suisse also indicates the same trend.

The Best Districts to Buy Property in Seoul

On the other hand, most of the new apartment buildings and new housing projects are built in non-metropolitan areas and comparably cheap. Below I have listed some of the most popular districts to buy real estate in Seoul.

Magok District is an area that was developed quite recently, it’s located in the Southwestern parts of Seoul. You can find both commercial and residential properties in this area.

In addition to research and development centers for some of the top technology brands in the world such as LG, you can also find prime residential compounds.

The area also features top universities, a huge central park, and the mass transit system that connects Magok District with the city’s commercial and central hubs like Gangnam and Yeouido.

The prices here are lower on average compared to the main business areas located in metropolitan areas.

Another newly constructed area in the suburbs is the state of the art Digital Media City (DMC). This area is located in the Northwestern parts of Seoul, in Sangam-dong.

DMC is a newly constructed area, offering serviced apartments that are mainly targeted to foreigners, making it an attractive place to invest.

The area is expected to attract more foreigners in the coming years, making it more interesting for investors.

Gangnam is situated in the southern part of the city, just south of the Han River. Property prices here are the highest in the country.

The Most Expensive Districts to Buy Property

The most expensive districts to buy property on average include:

These areas will always be sought after with high price apprecations. If your budget is limited, you should look at other areas, especially the suburbs.

Overall, there are a lot of newly developed suburbs in Seoul that allow you to buy apartments at lower prices. You can find some mega housing projects in suburbs like Goyang with a lot of empty apartment buildings.

Most of the Koreans and foreigners want to live near the metropolitan areas and business districts, which makes properties in these areas more expensive.

These areas will remain attractive due to a high demand, something we see in other large cities globally.

How much does it cost to buy a house in Seoul?

By comparison, real estate prices are around USD 1.2 million in Hong Kong, the most expensive real estate market in the world.

Below are examples of properties that you can buy in Seoul:

Buying property in a foreign country like Korea can be difficult without help from a local partner. For instance, you might not be able to communicate in English with the seller as well as managing contracts.

2 Responses to “Buying Real Estate in Seoul: The Complete Guide”