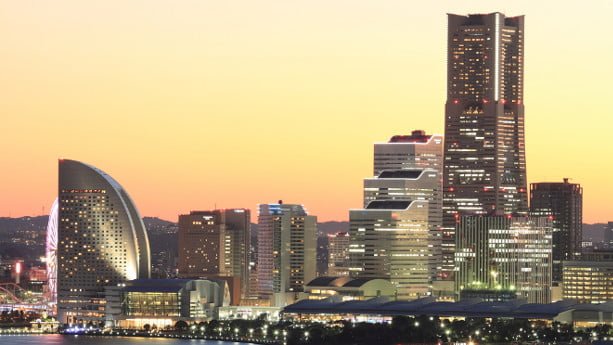 In fact, Yokohama is an overlooked city that is getting more and more appreciated, not only by locals but also foreigners.

With an increasing population, the demand will stay relatively high, compared to many other cities in Japan.

Before you invest in Yokohama property, you must get your feet wet and learn about the property market and buying regulations for foreigners.

In this article, we share valuable information with property buyers who are interested in the Yokohama real estate market.

Yokohama is the second-largest city in Japan in terms of population, but the most populous in terms of density.

It grows faster than any other city in Japan with new neighborhoods and areas that attract investors. In a way, it resembles developing markets as new investment opportunities emerge in new areas.

The city has become a popular destination for foreigners in recent years. Here, the foreign population has increased to a record number of 8% and is still growing.

Yokohama is unique for one reason: while its population has increased over the past decades, the population in Japan is shrinking.

Even in the 1950s, Yokohama was the 4th most populous city in Japan but temporarily climbed to the 1st position in 1985.

As the population increases, demand for real estate increases. Hong Kongers are some of the foreigners who now turn to Yokohama as real estate has gone too expensive back home.

Yokohama is a family-friendly city that welcomes foreigners and often offers better value to property buyers, compared to cities like Tokyo.

It’s also popular because of its proximity to Tokyo. It won’t take you more than 30 minutes to go by train between the cities.

You might think that property prices are on a similar level to Tokyo in Yokohama, but that’s not the case.

The average price difference is as high as 30%. Not surprisingly, this has been one of the main drivers why many Japanese relocate here.

Yokohama has experienced the sharpest rise in sale prices per square meter in the last years, with an increase of almost 10% yearly. That’s not bad for a developed market.

The average asking price of a 70 square meter second-hand apartment in Yokohama is around USD 300,000, at the moment I’m writing this article.

If you can’t afford property in Tokyo, Yokohama is where you should look next. You will be in proximity to the capital anyway.

Based on high demand and an increased interest from foreigners, the city plans to build a 180-meter tall residential tower to explicitly target foreign buyers.

It’s just one example out of a long list of upcoming residential projects, in an anticipation of a further shift of buyers moving from Tokyo to Yokohama.

The population increase, due to internal migration, proves that native Japanese find it a better place to live compared to other cities.

The surrounding beach with ample green space makes it a great place for expats and families.

The vacancy rate in Yokohama is higher than in Tokyo, mostly because of the rapid increase of new projects.

Where should I buy property in Yokohama?

Yokohama has the 5th busiest train station in the world. The residential areas around train stations are high in demand, and have higher rental costs, so prices are higher as well.

On average, you can buy a 2-bedroom apartment for USD 500,000 in high-demand areas. A three-bedroom home for around USD 1.5 million and a 5-bedroom family home for USD 3 million.

But prices vary much in the city. Yokohama consists of 18 wards and you can notice that new constructions are built almost everywhere.

Let’s have a look at some of the most interesting places in Yokohama.

The most important ward in Yokohama is called Kanagawa, which is a commercial center. Most industries have offices in this area.

The ward also has many universities, top schools, shopping malls, museums, train stations, and residential complexes, making it an attractive place for investors.

Properties are high in demand and expensive, but you can also earn much on rental incomes.

Many foreigners decide to stay in Yamate. The area also looks different compared to many other parts of Japan or Yokohama, due to its westernized architecture, a high number of churches, and preferable market outlook than other neighborhoods.

The Chinatown is also located here, it’s famously known for being the world’s safest Chinatown. Not surprisingly, most of the Chinese live here, while prices are also slightly higher and with higher rents.

It’s a good, quiet, and calm residential area for people with families and has many parks, schools, shopping malls, and museums.

These wards are situated in the northern part of the city. Compared to the central wards, there are mostly residential buildings in these wards, prices are also cheaper.

You can also find a sizable foreign population residing in these areas along, with many newly constructed apartment buildings.

This ward has a mix of residential neighborhoods and commercial districts.

You’ll find many high-rise residential apartment towers in this area, making it one of the most densely populated areas in the city.

Due to its proximity to downtown Yokohama, train stations, and neighboring commercial neighborhoods, the property prices and rentals are higher.

Hokoku is famous for its vibrant nightlife and entertainment.

Naka is the most centrally located ward and the main business district in Yokohama. It’s also one of the most expensive areas.

But the price growth is high and you’ll also earn decent money on high rental incomes if you afford to buy property here.

The area is also known for tourism, its upscale restaurants, shopping districts, and amusement parks.

You can find both high-end residential neighborhoods with large homes and newly-built modern apartment buildings.

Nishi provides good investment opportunities. It’s newly built and the smallest ward, but has a significant number of skyscrapers, including the second tallest building in Japan.

You can still find a lot of off-plan properties in Nishi, giving you the opportunity to buy property at a comparatively lower price.

The Minato-Mirai neighborhood is a fairly new area of the city with a modern outlook. The entire area developed from scratch in the last three decades, so the infrastructure is very modern.

The area around the Yokohama station is expensive, which also serves as the entertainment and commercial district of Nishi ward.

In addition, a smart town known as Tsunashima Sustainable Smart Town (SST) is currently being built in the Tsunashima district.

This sustainable environment-friendly area is constructed at the Panasonic factory site, which will have both residential and non-residential facilities.

Before you buy property in Yokohama, hiring a real estate agent should be on your to-do list, as they understand the local market.

Below I’ve listed some of the biggest real estate agents, for your convenience:

Keep in mind that even if it’s preferable to work with a Yokohama-based agent, there are plenty of agents in Tokyo that serves the market.

Contact a handful of agents and prepare questions beforehand, to make sure they are credible.

How much do I have to pay the agent?

As explained in my separate article about buying property in Japan, agents typically pocket 3% of the sales value in commission.

Yokohama is getting increasingly popular as real estate prices have gone through the roof in Tokyo. Yokohama is located in proximity to Tokyo and is one of the country’s largest cities, making it a suitable replacement.

Despite being located only around 30 minutes away by train, property prices are 30% cheaper on average.

Naturally, locals and foreigners have started to appreciate the city. Around 8% of the people living in Yokohama are now foreigners.

There are a handful of areas that are particularly to foreign property investors. The areas include Kanagawa, Yamate, Aoba and Tsuzuki, Hokoku, Naka, and Nishi.

Each area has unique features and brings different opportunities, depending on your investment or lifestyle goals.

Yokohama will continue to grow in the future as prices increase in Tokyo. It’s a city that shouldn’t be neglected among real estate investors who wish to stay in Japan, permanently or on a short-term basis.

1 Responses to “How to Buy Property in Yokohama: The Definitive Guide”