The COVID-19 outbreak has taken the world by storm and forced countries into lockdowns and governments to close down schools, restaurants, bars, and other establishments.

Vietnam acted quickly and has seen a comparably low amount of COVID-19 cases, but it will inevitably affect the economy badly.

In this article, we explain how Vietnam’s real estate market has behaved in previous years and how it behaves due to this outbreak. We also write weekly updates about the current situation in the country.

Vietnam’s borders remain closed until further notice. Only experts, investors, and managers who are eligible to enter the country can enter but must be quarantined for 14-days after arrival.

Europe and the European Chamber of Commerce (EuroCham) and other economies urge Vietnam to resume international flights, as the country has no confirmed coronavirus cases and represents a strong investment destination for those seeking diverse supply chains, according to Asia Nikkei.

Vietnam has reached an agreement with Japan to gradually relax travel restrictions between the two countries and travel from Japan to Vietnam has partially resumed this week. Chartered flights carrying about 440 businesspeople are scheduled from Thursday through Saturday from Japan.

The government has allowed nightclubs and karaoke parlors to reopen. The borders are still closed for travelers until further notice.

There’s still no official date when the international air traffic will resume.

Major electricity and transport projects now face delays as many foreign experts aren’t capable of being in the country.

As of May 28th, Vietnam’s Ministry of Health informed that confirmed cases remained at 327. 278 of the affected patients have been discharged from hospitals.

Vietnam will grant e-visa to citizens of 80 countries from July 1, 2020. However, this is more of a legal technicality as Vietnam is not opening the borders to foreign visitors due to the pandemic.

Vietnam recorded a 98% fall in visitors this April compared to 2019 because of the coronavirus pandemic, which is devastating in a country where tourism contributes more than 6% to the national GDP.

Vietnam’s Ministry of Health’s tally of confirmed cases of COVID-19 remained at 324 as of May 21st. 264 of the patients have recovered and been discharged from hospitals.

Vietnam’s Ministry of Health’s tally of confirmed cases of COVID-19 remained at 288 as of May 14th. 252 of the patients have recovered and been discharged from hospitals.

Vietnam repatriates overseas Vietnamese that are stuck, working, or studying overseas. 24 persons that were repatriated from Moscow on 2020-05-14 tested positive for COVID-19 and were sent to quarantine on arrival.

29 days have passed since Vietnam recorded any new corona cases.

As of May 7th, the confirmed cases of COVID-19 remained at 271. 232 of the patients have recovered and been discharged from hospitals.

The International Monetary Fund (IMF) expects Vietnam’s economy to grow 2.7% this year, less than half the 7% rate in 2018 – 2019. Vietnam also suffers hard due to halted tourism, a sector that generates 10% of GDP.

Vietnam’s Property Market in the Past Years

Vietnam opened to foreign investors in 2015 and has grown with an impressive rate since. In 2019, the economy grew by around 7%, a number that will decrease in 2020 due to the SARS-Cov-2 crisis.

The market suffered from a housing bust in 2009, recovered in 2013, and grew much from 2015. Foreign investors see Vietnam as one of the most interesting markets in Asia due to the following reasons:

Thanks to increased individual wealth among the Vietnamese and a greater interest among foreigners, numerous new property developments have popped up, boosting prices. 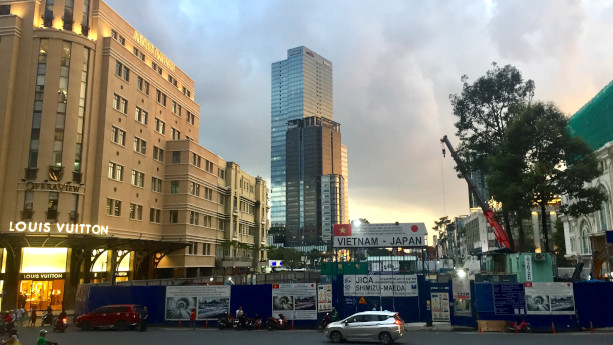 How has Vietnam responded to the COVID-19 outbreak?

On March 15, Vietnam suspended all visas and denied entry to travelers from the UK and the 26 Schengen countries. Besides, the country suspended the entry of all foreigners from March 22 until further notice to limit the spread of COVID-19.

From April 1st to April 22nd, we also saw the closures of bars, restaurants, barbershops, cinemas, gyms, and more as Vietnam introduced a period of self-isolation, to avoid spread.

At the same time, Vietnam has sent hundreds of thousands of face-masks and other equipment to countries that have suffered more from the virus, especially in Europe and the US. WHO has praised the country for its strong measures to contain the virus and work proactively.

As of April 21st, Vietnam’s Ministry of Health confirmed a total of 268 cases and with no new cases reported in the past five days. 214 of the 268 cases had recovered and were discharged from hospitals as of the same date.

For more details on how Vietnam’s government has responded to the crisis, I recommend you to read the following articles by the Diplomat and Vietnam-Briefing, which give you a good overview.

How has Vietnam’s economy been affected by COVID-19?

Early on, the Ministry of Planning and Investment warned that Vietnam’s economic growth rate would face a slowdown to 6.09% percent if the coronavirus pandemic is not fully contained.

It’s difficult to estimate how much the economy will grow and how prices will be affected, of course, as no one knows for how long the closure of borders will stay in place.

But, many analysts predict that Vietnam will be one of the best performers in Asia, despite the crisis.

Let’s focus on the cities where foreign investors typically buy real estate in Vietnam and how the prices have been affected.

Looking at sales volumes, the number of apartments sold in Ho Chi Minh decreased by around 50% in Q1 2020 compared to the last year. Only 1,980 units were sold which is an inevitable outcome due to the limited supply and that construction has partially stopped.

The average absorption rate, on the other hand, was only 54% of the total number of available units launched, the lowest figure for 2 years.

I believe that prices will decline further, not only in Vietnam, leaving room for foreign investors to enter the market at low price points.

Property values and transaction volumes have, not surprisingly dropped in Q1 2020. According to Vietnam Times, values have decreased by around 30% on average, compared to the same period in 2019.

The city is not only a resort destination but has a diverse economy, that attracts more start-ups, global corporations, and holiday spenders.

Looking at the rental market, we’ve also seen some major changes as tenants have asked for rental reductions. The Da Nang based real estate company Dai Thang Holdings has reduced rents by 20% for its buildings in the city center.

At the same time in Ho Chi Minh City, small and medium-sized companies have required cuts of up to 25%.

Looking at the condominium market, CBRE has confirmed that the average selling price in the primary market was USD 1,365 per square meter in Q1 2020, up by 4%.

It’s hard to say how the market will perform as it mainly depends on how long the pandemic will last.

Selling prices are expected to be reduced by around 6%, down to USD 1,300. This is mainly due to that high-end projects might delay their launches till 2021, at the same time, we’ll see reduced prices of established properties.