Da Nang is the fourth biggest city in Vietnam, it becomes increasingly popular among foreigners due to various reasons. Some worth mentioning are that Da Nang is generally more developed, it’s cleaner, calmer, has mountains, beaches and simply more attractive if you look for a calmer lifestyle, but still access to diners and bars.

The number of real estate agencies is less and the major companies like Savills, Colliers, and CBRE have all set up head offices in the capital, Saigon. Still, you’ll find a handful of real estate agents that have years of experience of helping foreigners.

In this article, I list some of the biggest and most popular real estate agencies in Da Nang.

Savills is one of the biggest and oldest real estate agencies globally. Originally founded in 1855 and with 30,000 professionals worldwide, the company has managed to establish a strong presence in Vietnam. Their first Vietnam office was opened in 1995 in Ho Chi Minh City.

Savills is also one of the few international agencies that has set up a separate office in Da Nang. The current managing director of Savill’s Da Nang branch is Matthew Powell, he has been residing in Vietnam since 1995 and has a long experience of the local real estate industry.

The company has won a number of awards over the years, for example:

The company mainly manages residential properties, such as luxury apartments, houses and more.

Some new showcases put on display on their website are: 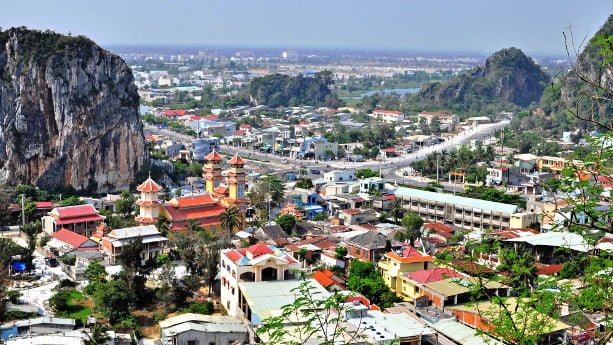 CBRE is one of the biggest real estate agents in the world and has set up offices in all major cities in Vietnam, including Da Nang. The company was originally founded in Los Angeles and currently has more than 80,000 professionals working in 400 different cities. CBRE opened its first head office in Ho Chi Minh City in 2003.

CBRE Vietnam has won many awards over the years, for example:

The commercial activity is not as big in Da Nang compared to Ho Chi Minh City and Hanoi. Therefore, you’ll mostly find residential properties up for sale, for example, villas, beach houses, luxury apartments and more.

CBRE currently only has one project up for listing in Da Nang, namely the Premier Village Danang Resort (The Sun Villas).

The project consists of 111 pool villas, located closer to the ocean and with just a 10-minute ride from the international airport.

Sotheby’s International Realty was founded in 1976 and is a real estate arm of Sotheby’s Auction House, which was established in 1744 in London. Since its inception, Sotheby’s has managed to set up offices in many countries and currently has 22,000 professionals globally.

The company focuses only on luxury properties and set up their first office in Vietnam in 2008. The same as it goes with the other major real estate companies, Sotheby’s currently has offices in the bigger cities, including Ho Chi Minh City, Hanoi and Da Nang.

Michael Piro is heading Sotheby’s Vietnam operations, he has almost a decade of experience working in both sales and the real estate industry and has been quoted by a number of magazines.

CVR is a fairly new company that was opened by Peter Frieske, a young estate agent who has lived in Da Nang for years. Prior to opening CVR, he worked at bigger companies in Vietnam, like Savills and Sotheby’s Realty. Peter has +8 years of experience in the real estate industry, 5 of those in Vietnam, and has previously lived in countries like Spain and the US.

The company currently has 9 professionals (including Peter) and sell properties in the central parts of Vietnam, namely Da Nang, Hoi An, and Hue. It also has an affiliate company that focuses on luxury properties: Luxurypropertydanang.com.

Include both commercial and residential properties, like condos, land, apartments, hotels, villas and more.

How high are the agent commissions in Vietnam?

Commission rates are usually at 2% of the agrees sales price and paid by the seller.

How much do I need to pay for property in Da Nang?

Prices vary much, not only depending on what type of property you want, but also the standard. Da Nang is “cleaner” and caters to many foreigners and locals who wish to live in a calmer place than Saigon and Hanoi. Therefore, many buyers tend to look for luxury real estate.

On average, property prices are lower compared to Saigon and Hanoi, but if you plan to buy a villa, you should be prepared to pay at least USD 300,000 if you want a decent place to stay in. It’s not rare that foreigners and locals pay as much as USD 500,000 – 1 million for villas.

Where should I buy in Da Nang?

If you haven’t been to Da Nang, you’ll see that it’s split up into an Eastern part and a Western part. The reason for this is that the city is split by a river called Han.

The Eastern side is famous for being more relaxed and with proximity to the beach, while the Western side of the river has more activity. There are also condos built along the river.

The city is much smaller compared to Saigon whatsoever and you’ll be able to communicate between the Eastern and Western sides within a short time. If you want to read more about how you can buy property in Da Nang, I recommend you to read my separate article.