We have already written a guide that explains about District 1 in Ho Chi Minh City. Today, I will cover one of my favorite districts, namely District 2.

Being one of the biggest districts in Ho Chi Minh, District 2 is the home to areas such as Thao Dien and An Phu that have grown remarkably in the past decade. District 2 will absorb much investment in the coming years as well, as Ho Chi Minh expands towards the East.

Being wedged between the upcoming District 9 and the city center, we’ll see a greater demand for both commercial, lifestyle and investment property in District 2.

Below you can find some of the most popular residential projects in District 2.

Located in Thao Dien and just next to the new Metro line, Masteri is a popular residential compound with tennis courts, park, and a commercial podium.

It’s easy to ‘get stuck’ here as you have all the amenities you need, including a swimming pool, gym, a shopping mall, restaurants, and even a cinema.

Many foreigners that move to Ho Chi Minh often move to Masteri at a start and later move to some of the more central districts, such as Binh Thanh or District 1. That said, Masteri has comparably low rents and offers a more peaceful atmosphere.

The square meter price is around USD 1,500 to 2,000, which makes Masteri a more affordable place to live than places like District 1. With more than 3,000 units, it’s one of the biggest residential projects in Ho Chi Minh. 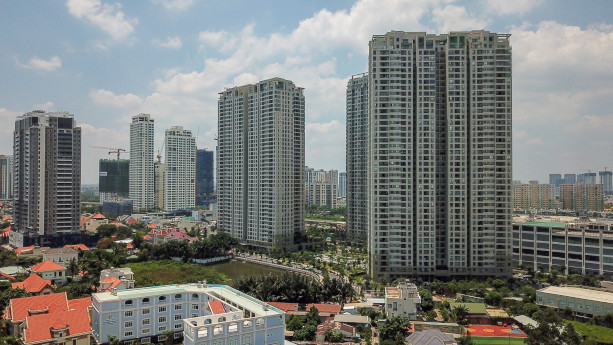 Vista Verde is another popular project in District 2, but slightly smaller than Masteri. With 1,200 units, Vista Verde has become one of the most popular projects in Ho Chi Minh, having amenities such as resort-style swimming pools, gyms, outdoor fitness areas, tennis court, BBQ terrace, and more.

The project was finalized in 2017 and built by the renowned Singaporean developer, CapitaLand, which has built several projects in the city.

One Verandah is built by another reputable property developer from Singapore, namely Mapletree. The project will finish in 2020 and have more than 700 units, ranging from 55 to 304 square meters.

It has been one of the most popular project among foreign buyers in the medium-price segment. It’s not strange, as you’ll get access to:

Being located in District 2, it also offers exceptionally high yields if you decide to rent the unit.

Compared to District 1, you won’t find as many real estate agents in District 2. Most of the big names, such as JLL and Colliers, operate from District 1. Having said that, you’ll still be able to find a handful of interesting agents.

Keep in mind that you don’t necessarily need to find a real estate agent in District 2 if you plan to buy property in Ho Chi Minh. But, it can make sense if you plan to rent.

RealtyQuest is located in Thao Dien and mainly helps expats with rentals. That said, over the past 15 years, they have helped both locals and foreigners with residential and commercial property services.

Kim Real Estate is located in An Phu and provides sales and rental services to locals and foreigners. They are a partner of companies such as Vietnam Airlines, Vietjet Air, Decathlon, and Zalora. Their staff speak both Vietnamese, English, and French.

District 2 is one of the biggest urban development areas in Southeast Asia and will grow immensely in the coming decade. It’s home to Thao Dien, the residential area with many expats, and Thu Thiem, the new financial district of Ho Chi Minh.

District 2 will inevitably become more popular among companies and individuals alike, as soon as the new Metro line is up and running, running from Ben Thanh to District 9. Several foreign developers, many from Singapore, now invest aggressively in District 2.

Thu Thiem will see the most investments in infrastructure for sure, an area where the government has spent ten years on demolition and site clearance, giving space to this vast development. Almost 15,000 households have already been relocated from the area.

District 2 and District 9 will absorb most of the new supply office until 2025. It’s not strange as land prices have increased immensely in the central districts in the past decade.

At the same time, we see a greater demand for land plots from foreign corporations who move manufacturing operations to Vietnam. They primarily acquire property in District 2 and District 9, where the Hi-Tech parks are located and property prices lower.

Thu Thiem resembles Pudong in Shanghai a couple of decades back, as it transformed from being a swamp to having one of the most impressive skylines in the world.

Prices are still comparably low in District 2 but quickly rise.