Ho Chi Minh is currently the second fastest-growing city in the world (after Bangalore) and attracts more and more foreign investors. In comparison to Bangalore, foreigners are at least allowed to own properties in Ho Chi Minh City.

The city is a melting pot, still, the real estate market is not as mature as Thailand’s, for example, which has resulted in a more narrow selection of agencies. It’s not strange whatsoever, as the country opened up to foreigners in 2015. In this article, I list some of the biggest real estate agencies in Ho Chi Minh City.

The real estate agencies are listed in random order.

Founded in 1898 and with 15,000 professionals working worldwide, Colliers is one of the biggest and most recognized real estate agencies globally. The headquarter of Colliers International Vietnam is based in Saigon, you’ll also find most properties up for listing here.

The company currently has two subsidiaries in Vietnam:

Colliers International Vietnam was founded in 1996 and Colliers Home a decade later, in 2016. The branch currently has six employees residing in Ho Chi Minh City.

Property types and areas in Vietnam

As mentioned above, Colliers has a separate website called Colliers Homes, if you look for residential properties, this is the place to be. You can find a number of property types, for example, villas, apartments, land, and penthouses.

Some of the well-known projects currently managed by Collier International Vietnam are: 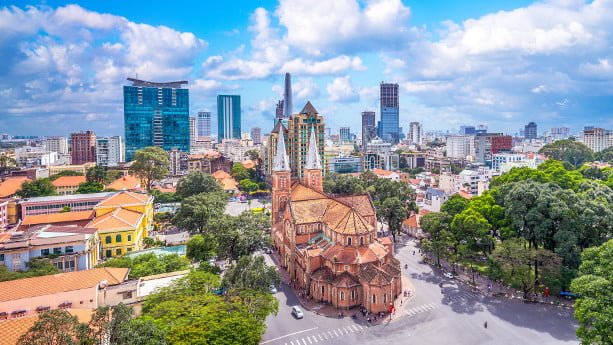 Savills is not only one of the biggest real estate agencies in the world, but also one of the oldest. The company was founded in 1855 (London) and has managed to establish offices in all continents. An impressive number of 800 professionals work in Vietnam, ready to cater to foreigners or locals who wish to buy properties in Vietnam.

The head office is located in Ho Chi Minh City and they’ve had a presence in Vietnam since 1955. Chesterton Petty, one of the most well-known agencies previously, was acquired by Savills Vietnam in 2007.

The company offers a number of services, including:

Colliers can guide you to buy both commercial, residential and industrial properties, mainly in Danang, Hanoi, and Ho Chi Minh City, where they’ve set up offices. You can also find properties in smaller cities, like Hue, Vung Tau, Dong Nai, Quang Ninh, and Nha Trang.

Some of the properties they currently manage include:

Savills has won a number of awards, including:

b. The Center of Brand Analysis – The Best Business Superbrand

CBRE is the biggest real estate agency in the world in terms of revenue, naturally, it has also set up offices in Vietnam. The company was originally founded in the United States and has around 80,000 professionals working all over the world. Their Vietnam office opened up in 2003 and is based in Ho Chi Minh City.

You can also find offices in Hanoi and Danang, the second and third largest cities in Vietnam.

Include a number of services, for example, leasing, sales of properties, leasing, rentals, and others.

CBRE mainly helps foreigners to buy property in the bigger cities, like Danang, Hanoi, and Ho Chi Minh City. But the same as it goes with Colliers, they also sell properties in a number of smaller cities.

You can buy both commercial and residential properties with the help of CBRE, including condos, land, villas, factories, warehouses just to mention a few.

Some of the currently listed properties on their website include:

The company has won many awards since it got established in Asia. Some are:

c. Golden Dragon Award from 2008 to 2016 from the Vietnam Economic Times

JLL (Jones Lang Lasalle) is one of the biggest real estate agencies in the world and currently has 80,000 professionals working in over 80 countries. With 300 offices worldwide, they’ve also managed to set up shops in Vietnam and Ho Chi Minh City.

Their Ho Chi Minh City branch was established in 2006 and is currently acting as the head office. You’ll be able to find a number of services offered by JLL, including leasing, sales, asset management, valuation, and more.

The main areas served include the capital Hanoi and also Ho Chi Minh City. You can find both commercial and residential properties, for example, office space, hotels, condos, apartments, villas, and more.

Some of the popular projects currently managed by the JLL Vietnam are listed below.

JLL Vietnam has won numerous awards the past years, some worth mentioning is:

b. FORTUNE – Among the World’s Most Admired Companies

Vietnam House was founded in 2011 and only serves Ho Chi Minh City, it’s one of the most popular listing sites nationally. They also provide other services like consultancy, brokerage services, management, and more.

The company has thousands of objects listed in HCMC, even if they mainly deal with rentals, you can still find both commercial and residential properties up for sale

Some projects that are listed on their website include:

Realty Quest is a suitable agent if you want to buy property in Thao Dien, or other areas in District 2. The company is managed by Westerners but also has local staff. Their prime focus is to help expats and foreigners to find properties, they also offer other services.

Includes residential properties such as condos and villas.

Some examples where Realty Quest sell condos include:

Thao Rogers understood that something was not right in the Saigon real estate industry, it lacked both ethics and good service. Therefore, she decided to open up Saigon Properties in 1995. The company is smaller and mainly get their clients from referrals from previous customers.