New Zealand has experienced great residential price increases recently, a market that is frequently discussed in the media.

With that said, the commercial property market is not as overheated and often offers higher yields.

Compared to developing countries in the Asia Pacific, you’ll find it easier to buy real estate here as a foreigner. In this article, I cover the following topics:

New Zealand is an open economy with property ownership regulations similar to Australia.

What sets these countries apart from most Southeast Asian countries is that you can buy commercial real estate both as a private individual and a company. You can buy real estate if:

Examples of property types that are available to foreigners include:

I will explain the different property types later in this article and what makes them interesting to foreign investors.

This is a great advantage, of course, as you won’t have to set up local joint ventures or real estate trading companies to comply with local regulations.

Thailand, Vietnam, Cambodia, and the Philippines are examples of countries where this is required. 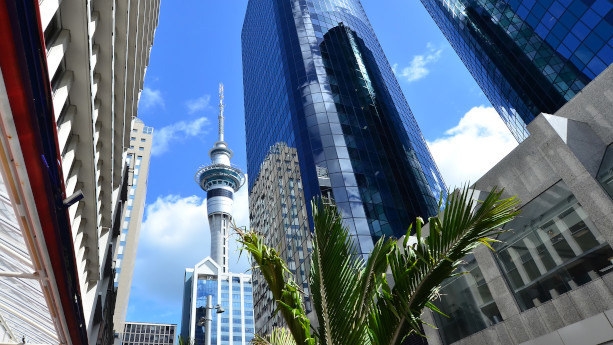 As a result, the government introduced new regulations in 2017 saying that you generally must have an Inland Revenue Department (IRD) New Zealand Tax number and a functioning bank account.

Besides, the sellers and buyers must duly fill in and sign a so-called Land Transfer Tax Statement. To do this, you need an IRD number or receive an exemption. Finally, you have to confirm whether you pay tax in other countries and share your taxpayer ID numbers for all these countries.

If the property is worth less than NZD 100 million (USD 65,359,477), you won’t need and approval from the Overseas Investment Office either. At the time I’m writing this article, 1 USD equals NZD 1.53.

Such approvals can generally be obtained through a local lawyer that guides you through the whole buying process. The same as for Australia, you won’t be subject to exchange controls and capital can move freely in and out of the country.

As mentioned, foreigners usually don’t have any restrictions to get hold of commercial real estate in New Zealand.

Let’s have a look at the most interesting property types and how the market has performed.

New Zealand has become an increasingly popular tourist destination and the industry is almost as big as the most profitable one, its dairy industry. The number of arrivals increased as follows from 2013 – 2017:

We’ve seen strong growth in all the major cities and where Auckland has performed exceptionally well. The city has also delivered the highest number of hotel rooms, followed by Wellington and Christchurch.

Due to the pandemic in 2020, the hotel industry was hit hard. In Queenstown, for example, 11% of hotels were fully operational and 58% fully closed in April the same year.

I recommend you to read my separate article where I explain more how you can invest in hotels in New Zealand as a foreigner.

The office market has performed well in the past years, thanks to the economic growth of 3% – 5%. That’s not bad in a developed country with low inflation rates.

The high employment and population increase has also helped the market and we have seen a lack of supply of office space. This will entice developers to continue building more space in the future and once the market starts to recover.

A trend that we see in other countries is the rise of co-working spaces and office space for small and medium-sized companies. This market accounts for 2% to 9%, depending on the city.

With that said, most tenants are still looking for traditional office space.

The retail property market shows positive signs with healthy growth, more than 90% of all retail sales come from physical stores.

Spending continues to increase and around USD 95 billion of retail trade took place in ‘bricks and mortar’ units in 2019, according to Colliers. That’s an increase of around 4% from the year before.

Not surprisingly, the 2020 pandemic crisis had a negative impact on the retail market and we saw a sharp decline in the sales of vehicles, dinings, and accommodation, for example.

Let’s hope that the market will rebound quickly once the situation improves.

Industrial real estate is comparatively affordable in New Zealand and Auckland is by far one of the most interesting cities for investments in the asset type.

One of the biggest risks of investing in industrial property is high vacancy rates. To avoid this, you must consult with an experienced local agent to make sure that the following points are fulfilled:

Looking at cities, Auckland, Wellington, Christchurch, and Tauranga are considered the best investment destinations, thanks to their size and the industries operating there.

New Zealand has seen a lack of car parks in previous years, with an increase in office space and retail units, there’s still not a sufficient supply of car parks. Few investors make money from investment in car parks, but it’s proven to be profitable.

For example, prices have jumped 60% in as little as 5 years in some areas, which is mainly due to low-interest rates and a lack of supply.

Car parks are not the first option among many commercial property investors, as there are so many other assets available in the market.

Cities to Invest in Commercial Property

New Zealand is a comparatively small country and the commercial property investments are centered around the bigger cities, specifically in Auckland and Wellington.

Below I explain how the commercial property market behaves in the cities.

Auckland is the most popular city among commercial real estate investors and where you can find some of the greatest returns.

With capital appreciations at similar levels a residential property, net rental yields can stretch up to 5% or even more. Compared that to residential real estate where yields hover at the 2%-3% mark.

Vacancy rates have also been among the lowest in the country.

Auckland continues to grow and should be at the top of your list when searching for investment opportunities in New Zealand.

Commercial property values and rents have increased much in Wellington and it’s now considered a “compelling” investment destination.

Being the capital of New Zealand, the city is still significantly smaller than Auckland, having around 220,000 people compared to 1.6 million. Despite its small size, at least in terms of population, Wellington becomes increasingly interesting for commercial property investments.

Below you can find the taxes and fees you have to pay when buying commercial real estate in New Zealand.

Your lawyer should help you to confirm whether you have to pay a Goods and Services Tax (GST) of 15% when buying the property.

You have to pay income tax (28%) if you meet any of the following:

You don’t have to pay any stamp duty when acquiring residential or commercial property in New Zealand.

Below you can find some commonly asked questions and our replies.

Can I reduce my commercial property taxes?

Some investors manage to reduce their tax burden through different corporate structures, for example, limited liability partnerships. These can be structured to reduce your tax burden when selling the unit.

Who can own property in New Zealand?

Foreigners generally don’t have any issues buying, holding, or selling commercial real estate in New Zealand. With that said, you should talk with a lawyer who can help you through the buying process to avoid any pitfalls.

In 2018, the government banned foreigners from buying residential properties due to great price increases.

The New Zealand government has made it more difficult for foreigners to acquire local farmland. It’s treated as sensitive assets and one now has to get approval from the Overseas Investment Office (OIO) first.