Thailand’s commercial real estate market is less spoken about compared to other regional countries, like Singapore and Malaysia. It’s primarily a result of these countries being more developed and not as regulated in terms of foreign ownership.

By comparison, there are not many options available in Thailand and sometimes not at all, at least not to individual investors.

Therefore, I’ve written this article where we review how you can invest in commercial real estate as a foreigner in Thailand.

Foreign individuals can generally not own commercial property in Thailand. Instead, it’s far more common to buy condo units as the buying process is straightforward and you can even own the units on a freehold basis.

Worth pointing out is that ownership regulations differ when you buy real estate as an individual or through a company. Let’s have a look at the two different options.

If you’re an individual buyer, Thailand is probably not your best country for commercial property investments.

You can typically only buy strata-titled office space (sometimes referred to as Office Condominiums), as these are part of the Condominium Act.

The same as it goes with condos, there’s a foreign quota set to 49%.

Since 2000, only one new strata-title office building has been built in Thailand, called “The Trendy”, finished in 2008.

One benefit of investing in strata-title offices compared to condominiums is that square meter prices can be half as high in Bangkok’s prime central districts.

As mentioned, foreign companies (like developers) also set up joint-ventures (JVs) with local Thai companies to access the market.

Opening a Thai company is easier said than done though and you normally need to apply for a Foreign Business License (FBL) if there are less than 51% of Thai shareholders.

This involves some risk, of course, and a reason why many foreign companies prefer to lease instead of buying. But there are two exceptions.

US citizens and companies have a privilege as they can be majority shareholders of Thai companies, thanks to the ‘Treaty of Amity and Economic Relations between Thailand and the US, which was signed in 1966.

In addition, the Board of Investment (BOI) in Thailand can exempt foreigners from applying for a Foreign Business License, for special projects in specified areas.

This is not granted that that frequently, but it can be worthwhile contacting a lawyer to confirm if this is possible. 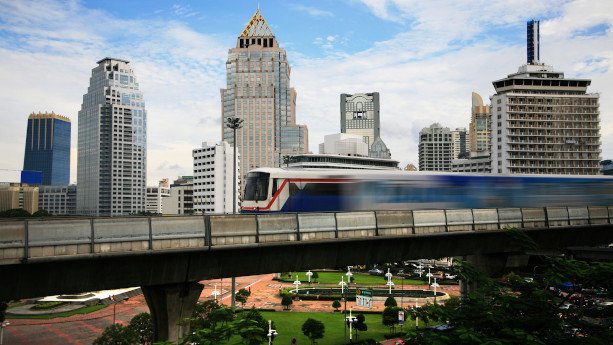 Thailand’s residential property market has faced headwinds due to tightened lending policies and an oversupply of condo units.

The commercial property market performs differently, but we see both challenges and opportunities in different industries.

Bangkok is the most visited city in the world and Thailand as a whole attracts tens of millions of foreign travelers yearly. It shouldn’t come as a surprise that hotel-nights are in high demand here.

Looking at demographics, the following five countries account for the highest number of travelers (listed in chronological order):

Around 70% of travelers look for 4 to 5-star hotels in the relatively higher price segment. At the same time, occupancy rates are high in cities like Bangkok, hovering between 80% to 90%.

Hotel operators have seen record-high occupancy rates in the past years, a reason why we’ll see price increases as well.

Even if there are many new hotels in the pipeline for the coming years, the market is healthy and will continue to grow.

It’s predicted that we’ll see more travelers from countries like India, China, and UAE in the future, but there will be a continued steady demand from other countries as well.

The hotel market is one of the most regulated and operators need to obtain necessary licenses and permits when managing hotel businesses.

Hotels are also divided into five different classes, where regulations differ depending on the class.

Below I’ve listed a few examples of licenses and agreements you need to check before you start or continue the operations of a hotel:

For more information, I recommend you to read my separate article where I explain how foreigners can invest in hotels in Thailand.

According to CBRE, the amount of office space grows by 200,000 square meters per year and rents will continue to rise, until 2022, when the supply increases.

Worth mentioning is that co-working spaces will inevitably transform Bangkok’s office space industry in the coming decade. It’s even claimed that 30% of all office space around Asia will be flexible workspace.

Big corporations and small companies see the benefits of using co-working space as an alternative to traditional offices. It’s proven to be cost-efficient at the same time as it’s easy to relocate the workforce.

We see less demand for office space in cities like Chiang Mai, Pattaya, and Phuket. It’s not strange as we see less commercial activity here and these cities are more tourism-dependant and with manufacturing operations.

The retail industry has started to recover thanks to the improvement of the general economy. But challenges lie ahead. Consumption is still weak, at the same time we see changes in the retail property market.

This is not something we see only in Thailand, but practically in all countries in Asia, like Korea. To quote CBRE Thailand: “This rapid transformation of the retail landscape means malls must innovate or die.”

We also see that tenants put more pressure on landlords of retail property, mainly due to the increased competition.

Previously, landlords have put much risk on tenants by offering leases stretching up to 3 to 5 years. This has put pressure on tenants to deliver good sales results and landlords often try to squeeze as much money as possible from rents.

Now, we see a trend where landlords have to take on more risk as rents are based on a percentage of sales revenues, referred to as Gross Profit (GP) rent.

We also see that landlords have to provide more data about the premises, including the number of visitors to malls, how much they spend, and more.

With the increased competition in the retail industry, landlords will need to cope with higher demands from tenants.

Purchases are often done through Joint Ventures (JVs) between local and overseas developers.

Guangxi Construction Engineering Group and CP Land is one example where a local Thai-company set up a JV with a foreign entity to acquire property locally.

With that said, leasing premises is also very common, due to the regulatory issues and the paperwork involved when purchasing industrial real estate.

If you’re an individual private investor, you should have a look at REITs for commercial property in Thailand, as it’s significantly easier to invest this way.

Cities like Bangkok suffer much from traffic congestions and available parking spaces, a reason why Japanese operators have started to target its car parking industry.

By automatizing car parks, they can reduce labor costs and parking fees, which has resulted in 90% of operating revenues. They simply install automatic fare adjustment systems, surveillance cameras, and electronic signage to show space availability.

Another key point mentioned is that the market is highly sensitive to high parking fees. These should be raised in line with growing income.

Interestingly, we see an increase in automated car parks along with the increase in condo developments. This doesn’t only happen in Thailand but in other Asian countries.

According to the General Manager of Space Value (Thailand) Co., only 10% of prime condos in Bangkok installed automated parking systems, but that number has been increased to 80%.

Best Cities to Invest in Commercial Property in Thailand

Bangkok stands apart as the only business hub in Thailand, the demand for commercial property is undoubtedly the highest here.

Yet there are also many tourist destinations where investors look for hotels and restaurants, for example.

As mentioned, Bangkok is the most visited city in the world and the financial hub of Thailand. Thus, you don’t only have the opportunity to invest in hotels, but other assets such as office space, industrial property, and retail property.

You don’t necessarily need to have an office in its central business district, which is not only the most sought-after area but the most expensive.

Bangkok has a new central business district which is located close to Rama IX and Ratchada.

Along with the construction of new MRT lines, more companies decide to set up offices here. Prices are generally cheaper here, at the same time as it’s easier for workers to commute.

The South and Western parts of Phuket host the most travelers for sure and where prices are higher. With that said, the Northern parts become increasingly popular and where see more residential developments.

Some of the benefits of buying a property in the Northern parts are the proximity to the new international airport and the lower prices.

Koh Samui is famous for being less bustling than Phuket, but still a preferred choice among many travelers. Properties up for sale include commercial land (which gets increasingly popular), hotels, and restaurants.

Despite not being a developed tourism destination like Phuket, Koh Samui is the preferred choice for many families and there’s a bigger diversity in terms of nationalities.

It’s said that Koh Samui doesn’t suffer from over-supply of property as Phuket does.

Thailand is well-known for having some of the most competitive property taxes in the region.

Let’s have a look at the taxes you need to pay when buying, holding, and selling commercial property.

A stamp duty of 0.5% multiplied by the assessed value is charged to individual buyers.

If you buy property as a company, the stamp duty is waived and you pay a business tax instead.

Individuals and companies alike pay a business tax which is 3.3% and multiplied by the appraised value or registered sales value, whichever is higher.

As mentioned, if you’re a company you pay the business tax but not the stamp duty.

Individuals pay a withholding tax which increases progressively from 5% to 37% and multiplied by the assessed value.

Companies are only subject to a withholding tax of 1% of the registered sales value or the assessed value, whichever is higher.

The taxable amount is calculated by multiplying the assessed value by a deduction factor, measured in percent. The factor ranges between 0.08 – 0.5%, the longer you hold the property, the higher the deduction rate.

The municipal tax is 10% and multiplied by the business tax amount.

The transfer fee is generally 2%.

Companies are subject to a capital gains tax equal to ordinary business income tax, which is 30%.

Individuals are not subject to any capital gains tax in theory, yet profits will be taxed per the personal income tax rate.

Below you can find commonly asked questions and our replies.

What are the biggest commercial real estate agents in Thailand?

There are plenty of commercial real estate agencies available in Thailand that can help you identify interesting units.

Some of them are international with offices in dozens of countries, including:

You can also find boutique agencies that have a long experience in catering to investors.

How can I find commercial real estate for sale in Thailand?

You can look for commercial real estate on various listing websites. You can also connect with an agent to assist in the screening and buying process.

A preferred option is to work with a dedicated partner that can present multiple options at once and that doesn’t only sell a specific unit.

How much do I need to pay my agent?

Real estate commissions vary depending on the property value and the project. In general, the commissions stretch from around 1% – 2% for commercial property.