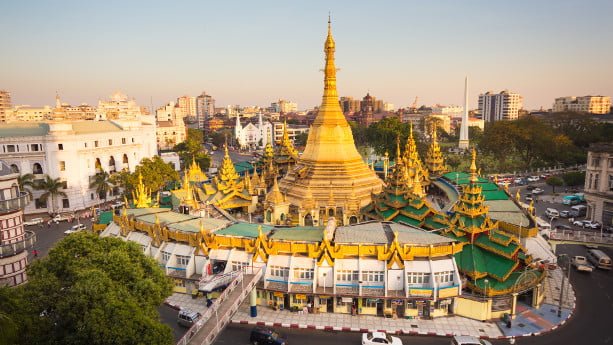 Being a military junta for decades, Myanmar opened up to the rest of the world very recently. Not surprisingly, it’s not the easiest place to do business or buy real estate in Asia. Hopefully, things will change over the years.

Still, Myanmar is an untapped frontier market with lots of potential, a reason why property buyers and investors alike, turn their eyes to this country.

There are a lot of infrastructural investment going on in Myanmar, and many new properties in the pipeline. But it’s not easy to find summarized information about the developers, operating in the country.

Therefore, I’ve written this article where I list some of the biggest and most reputable property developers in Myanmar.

Marga Landmark Development Co. Ltd is the real estate wing of the Marga Group, one of the largest conglomerates in Myanmar. Marga Group is an international corporation that owns several subsidiaries, working in real estate and the telecommunication sector in Myanmar.

Marga Landmark Development focuses on mixed-use and high-end property developments. The company is based in Yangon, the founder and the chairman of the company is Dr. Stephen Suen, who has more than three decades of experience in real estate, management, telecommunication, and finance.

The team of directors includes several members from Australia, UK, Hong Kong, Korea, and other countries. In Myanmar, all the Marga Landmark Development real estate projects are concentrated within Yangon, where they’ve developed residential and retail projects in the past years.

Marga Landmark Development is known for their flagship mega project, The Central, which is a mixed-use project. The project consists of several residential towers, a commercial office space, and a shopping mall.

Shwe Taung has operated in Myanmar for around five decades, with several mega infrastructure projects to their name. It started as a small shop in Yangon in 1970, founded by Mr. Aik Htun. In 1992, the company entered into the construction business with two small-scale projects in Yangon.

In addition to real estate developments, they’re also known for Hydro Power projects as well as infrastructural projects, like highways and bridges.

Shwe Taung Development is known for mixed-use large scale projects, which include Junction City, one of the biggest mixed-use development projects in Myanmar. The company has more than 7,000 employees, making them the biggest private employer in the country.

Property types include mixed-use residential projects, commercial offices, industrial parks, shopping malls, and residential township projects. An impressive construction is the Junction Square which was finished in 2012, the largest shopping mall in Myanmar.

The company has won several awards in the last few years that include:

Their most famous project is Junction City, which is a mixed-use project with several residential complexes, six shopping centers, and other commercial buildings.

In addition, they’ve constructed the Union Business Center and Union Financial Centers in Yangon. So far, all of their real estate projects are centered within Yangon only.

The company has also finalized an agreement to develop franchises of a lifestyle bakery chain called BreadTalk, throughout the country.

Founded in 2013, IME Property Co. Ltd is owned by IME Holdings Co., Ltd. (which was founded in 2011). It’s a private-owned group of companies working in several sectors, including real estate. The head office of the company is based in Bahan Town, Yangon.

Some other companies owned by the group are:

The founder and the chairman of the company is Zaw Myint Htoo. He’s a graduate from the Rochester Institute of Technology, New York, USA.

They’re currently working on two real estate projects, one is the residential project “The Leaf Residence” in Yangon, and the second one is a 4-star resort hotel in Shan State.

A few more hotels and commercial properties are planned in the upcoming years.

It’s a Singapore based company with office in Yangon. The chairman of the company is Serge Pun. He’s the founder and chairman of SPA (Serge Pun & Associates), that works in partnership with Yoma Strategic Holdings.

The real estate wing focuses on large-scale real estate developments and they’re mostly known for their huge residential projects like FMI City, StarCity, and Pun Hlaing Estate. The FMI City, a 465-acre project, established in 1995, is considered as the first large-scale gated housing society in the country.

Keppel Land is a well-known international developer based in Singapore that operates in Myanmar. They’ve completed projects in China, Indonesia, Vietnam, Philippines, and United Kingdom.

Keppel Land is a real estate arm of Keppel Group, one of the biggest conglomerates operating in Singapore. Keppel Land is also considered, among many, to be the most well-known and recognized property developer in Asia. They’re best known for commercial developments, mostly in the form of high-rise office buildings.

The company has only completed one project so far in Myanmar, called Junction City Tower, a 23-story mixed-use tower based in Yangon that was completed in 2017.

In 2015, Keppel Land was ranked 4th in the Corporate Knights’ Global 100 Most Sustainable Corporations in the world, and number one in Asia. They’ve also won several other awards in the real estate industry.

Include one project in Myanmar so far, but the company works on another sister tower, Junction City Office Tower, besides the already completed Junction City Tower.

Capital Diamond Star Group, also known as CDSG, is a leading real estate developer in Myanmar. Founded in 1960 as a small trading company, it’s also one of the oldest companies in the country.

CDSG is a group of companies that work in different sectors, including real estate. They own several subsidiaries working in retail, food, home care, personal care, financial services, telecommunication, and several other industries.

Most of their projects are centered within Yangon. The company currently employs more than 7,500 people., making it one of the biggest companies in the country.

In 2014, CDSG was selected as a Global Growth Company by the World Economic Forum, which makes it the first company to gain such status in Myanmar.

Some of their recent and current projects are:

MFG, also known as Myanmar First Global Holdings, is a real estate investment and development company based in Yangon. The company also has an international presence with offices in Singapore and Hong Kong.

MFG Holdings was founded in 2011 and quickly evolved into one of the top real estate developers in the country. MFG is known for its mid-premium-quality residential projects, but also develop shopping malls, commercial buildings, offices, resorts, hotels, and plazas.

Renee Sou is currently working as the Vice President, who oversees all business operations and management.

They are currently working on five off-plan projects, while dozens of other new projects are in the pipeline. Some of their current projects are:

In addition, hotels and resorts are being developed in different locations throughout Myanmar.

Green Vision Group of Companies is a well-known property development and management company. It was founded in 2011, within a few years, it’s become a leading real estate developer in Myanmar.

Green Vision currently employs more than 65 employees, consisting of both Myanmar citizens and expats. The chairman is U Ye Htut, who has more than 20 years of experience working as a construction contractor. He’s also a former elected member of the Myanmar parliament.

The founder and managing director is Zarni, also known as Nyan Mint Htut. He’s a graduate from the University of East Anglia, UK, and formerly worked as the Regional Programme Manager for Save the Children.

The company has won several awards in the last few years, for example, as Highly Commended Best Developer Award for 2015 and Best Boutique Developer 2016 by Myanmar Property Awards.

By 2018, Green Vision has completed seven projects, working on one project currently, and planning to start 13 new in the near future.

The Myanmar Seilone Group is famous for its high-end hotels and resorts. In addition to developments of luxury hotels and resorts, they develop high-end condominiums, serviced apartments, and villas. Their focus is to provide a luxury lifestyle to clients.

The Group was founded in 1989 by Mr. Khun Myat Lahtaw and started as the Golden Myanmar Trading Company, but later changed its name.

The company has developed real estate projects in two cities so far, Yangon and Nay Pyi Taw. In addition to real estate, they own another subsidiary, Myanmar Seilone Hotels and Resorts.

The Myanmar Seilone Hotels and Resorts has developed 14 hotels and resorts so far in Myanmar and Thailand and offers hotel and serviced apartment management services under a different subsidiary, called Myanmar Seilone Services.

Include Myat Mingalar Residence 313, a 16 story luxury condominium complex in Yangon, and also the Residence.

8 Responses to “Top 9 Property Developers in Myanmar: A Complete Guide”