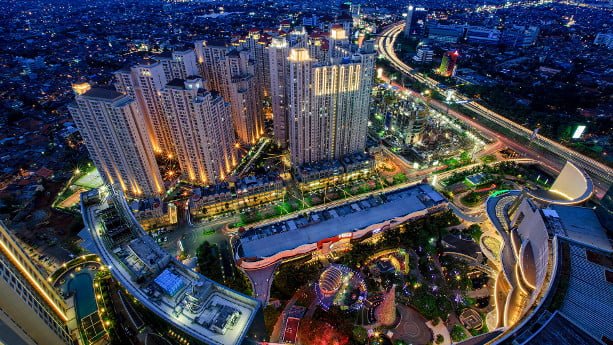 Lippo Group is one of the largest property developers in Indonesia that owns a number of companies in different industries. It’s sometimes referred to as PT Lippo Karawaci Tbk and owns many real estate subsidiaries including Lippo Village, Lippo Homes, Lippo Malls, Cinemaxx and more.

Notably, it’s not only one of the biggest, but one of the oldest property developers in Indonesia, founded in 1950. It’s previously been ranked among the 50 best companies in Indonesia by Forbes.

Lippo Group is owned by Mochtar Riady and his family, he’s currently the 9th richest person in Indonesia. The company was ranked among the 10 best developers in Southeast Asia.

Lippo Group develops different types of property in Indonesia, including hospitals, universities, malls, hotels, and residentials. They are known for their large scale residential projects like Lippo Village.

Residential projects include both housing projects and high rise apartments.

b. The price of one bedroom apartment in the Nine Residence is around USD 75.000

c. The price of a two bedroom apartment in Holland Village is around USD 250.000

Sinar Mas Land is one of the largest residential and commercial property developers in Indonesia. Founded in 1988, it’s also acquired two large property developers, Duta Pertiwi Tbk and Bumi Serpong Damai Tbk, that are currently under its umbrella.

The company has won many awards, for example, the Special Recognition CSR Award and Best Retail Architecture Design Award for The Breeze Lifestyle Center by Property Report Development Awards in 2016.

In 2017, the CEO of the company, Michael Widjaja won the Real Estate Property Personality of the Year Award. It’s also ranked among the 10 best developers in Southeast Asia.

In addition to Indonesia, they’ve also developed a number of residential projects in China.

Sinar Mas Land is currently planning to develop high-end mixed-use projects in BSD City, Banten, and Tangerang, in a partnership with Mitsubishi.

They’re also planning to invest more than USD 500 million in the development of an integrated smart digital city in BSD in the coming years.

b. The price of a 3 bedroom apartment with private lift in Aerium is around USD 3.5 million

c. The price of a 3 bedroom house in Rumah Premium Suasana Asri is around USD 1.4 million

Agung Sedayu Group is a leading developer based in Jakarta. It was founded in 1971 and develops both residential and commercial projects.

a. The price of a 4 bedroom apartment in Langham Residence is around USD 3.2 million

RDTX is a leading property developer and trading company, founded in 1980. The real estate arm of the RDTX Group is known as Chaitaland Perkasa PT.

Chaitaland Perkasa PT was ranked as the second-best property developer in Indonesia by BCI Asia Top 10 Awards for 2017.

Chaitaland Perkasa PT mostly develops commercial projects like office buildings for rental purposes. They also develop projects for commercial warehousing but there are few residential projects as well under their name.

Ciputra Group is a major conglomerate that owns many different subsidiaries working in real estate, healthcare, media and telecommunication, brokerage, insurance and finance.

The real estate arm of the Group is called Ciptura Development. Dr. Hc. Ciptura founded the conglomerate in 1981, he’s one of the 25 richest people in Indonesia according to Forbes.

They’ve completed hundreds of projects in almost all major cities of Indonesia, along with a few projects in Vietnam, China, and Cambodia.

So far, they’ve completed more than 75 development projects in 33 different cities which is quite impressive.

The price of a house in the Citra City Residence is around USD 60.000.

Duta Anggada Realty is a popular real estate developer in Indonesia, founded in 1983. The head office of the company is based in Jakarta.

In the last 30 years, they have completed around 25 residential, commercial, and retail projects and they were ranked as the 4th best developer by BCI Asia Top 10 Awards in 2017.

Most of the projects developed by Duta Anggada Realty are commercial projects and office buildings, but they’ve developed retail and residential complexes as well.

Residential projects include both apartments and townships.

a. The price of an apartment in Citywalk Sudirman is around USD 2 million

Permata Birama Sakti is a growing property developer in Indonesia. They’re relatively new compared to the other companies listed so far, their head office is located in Jakarta.

Permata Birama Sakti won the Best Landscape Architectural Design Award by Property Report in 2017 for its Millennium Centennial Center project. It was also ranked among the top 10 developers in Indonesia in 2017 by BCI Asia Top 10 Awards.

The price of an apartment in the Sailendra, Jakarta is around USD 1.5 million.

PP Properti PT is another growing new developer that’s based in Jakarta.

The parent company PT PP TBK is involved in all major government buildings and owns eight subsidiaries, all working in the real estate sector.

Include residential, commercial, hotel and retail property. Most residential projects are high-rise apartment buildings, along with a few townships and housing complexes.

a. The price of an apartment in the Alton in Tembalang, Semarang is around USD 300.000

b. The price of a one-bedroom apartment in the Grand Kamala Lagoon in Kalimalang, Bekasi is around USD 300.000

Tokyu Land Indonesia is a subsidiary of the Tokyu Fudosan Group. The group owns more than 100 subsidiaries and has around 19000 employees, which speaks for itself.

As you can probably hear by its name, it’s a Japan-based company, but Tokyu Land Indonesia PT focuses only on the development of property in Indonesia. They’ve won the award for being the Best Foreign Property Developer in Indonesia, by Golden Property Awards.

Tokyu Land Corporation was established in 1953, but the subsidiary wasn’t founded until 1975.

Most of their projects are residential and mostly high-rise condominium buildings. They’ve also developed some office buildings and hotels.

a. The price of a condo in the Branz Simatupang in Jakarta is around USD 1.9 million

I hope you found this article useful and interesting. I also recommend you to read my separate guide that explains how you can buy property as a foreigner in Indonesia. Including everything from regulations to foreign ownership, property taxes, where you should buy property in Indonesia and more.

Want to buy property in Indonesia?