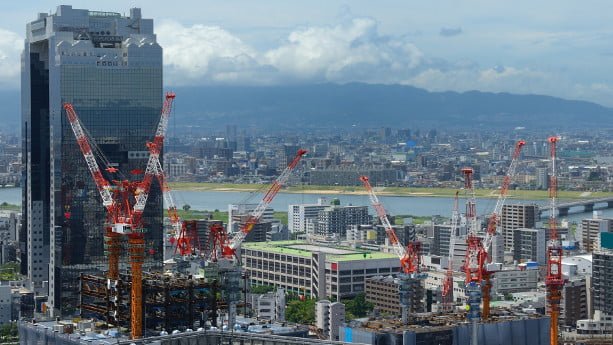 Not surprisingly, you’ll find a number of local real estate developers that build different kinds of property, not only in Japan, but also overseas.

It was formerly known as Mori Building Development Co., Ltd but changed name to Mori Trust in 1999. The company owns a multiple number of subsidiaries, including Mori Trust Hotels & Resorts.

The company has pledged to invest around USD 7 billion in new projects in the coming decade.

The price of an apartment in the Foretseine Akasaka Hinokizaka is around USD 6.5 million (JPY 720 million).

Mitsubishi Estate, also known as MEC, was founded in 1937 and ranked as one of the oldest and largest real estate developers in Japan. Keiji Kimura is the Chairman of the company and its headquarter located in Tokyo.

They’ve developed residential and commercial projects in almost all major cities in Japan but also in China, Vietnam, Singapore, the United States, Malaysia and Indonesia.

Worth mentioning is that Mitsubishi Estate has recorded an all-time high pretax profit, according to Nikkei Asia.

Most of their residential projects are high-rise condominiums whatsoever and built under one of its subsidiaries, Mitsubishi Jisho Residence Co., Ltd.

Mitsubishi Estate build the tallest building in Japan, expected to be completed by 2027.

The price of an apartment in the Krono Residence (The Parkhouse Harumi Towers) is around USD 7,000 per square meter (JPY 770,000).

Mitsui Fudosan is one of the largest property developers in Japan, owned by an even larger company, Mitsui Group. It was founded in 1941 and currently headquartered in Tokyo, Japan.

They’ve built residential, commercial and leisure projects in Japan and worldwide, including the United States.

Mitsui Fudosan is also developing a 51 floor office tower in the United States, which is the largest overseas project by a Japan based real estate developer. They also own six different real estate subsidiaries working in China, UK, and United States.

Hence, they offer all types of properties, including residential projects, commercial and retail property. They also develop and manage government properties like museums (Hara Model Railway Museum is one of them).

Sumitomo Realty & Development is one of the oldest and biggest property developers in Japan, founded in 1949. The head office of the company is situated in Tokyo.

The company was first known as Izumi Real Estate Co., Ltd, but later changed its name to Sumitomo Realty & Development in 1957. It also owns a number of subsidiaries like Sumitomo Fudosan tatemono Service Co., Ltd. and American Comfort, also working in the real estate industry.

According to a report by Nikkei Asian Review, Sumitomo Realty & Development also recorded the all-time high pretax profit in 2016.

They build all types of residential and commercial projects, including office buildings, condominiums, housing projects, apartments and hotels.

Sumitomo Realty & Development develops and sells around 5,000 condominiums every year.

Tokyu Land Corporation is a leading residential and commercial property developer in Japan. It’s a subsidiary of Tokyu Foundation Holdings, which is a century old business.

In addition to hundreds of real estate projects in Japan, they’ve also developed properties in Indonesia, the United States and China.

It was founded in 1953, and their head office is based in Tokyo. They also own multiple subsidiaries, including:

a. Tokyu Land Corporation has developed hundreds of residential, commercial, retail and leisure properties in Japan.

b. Their residential projects include condominiums, apartments, detached-house projects and senior housing projects.

Most of their new projects are focused towards retail and commercial projects, mostly under the brand names Q plaza, Tokyu Plaza, Q’s Mall and Market Square.

Note: The apartment brands by Tokyu Land, Branz and Als are at the top in terms of resale value.

Founded in 1960, Daikyo Incorporated is one of the leading condominium developer in Japan. Daikyo is famous for the Elsa Tower that was built in 1998 and was the tallest building in Japan at that time.

It’s also ranked as the biggest condominium management company in the country. They’re currently managing more than 500,000 condominiums. They’ve been developing and selling condominiums in Japan since 1968.

They also own a number of subsidiaries in Japan, Australia and Hong Kong.

They’re known for building condominiums and become the first company to manage over half a million condominiums in 2014.

They also offer serviced housing for senior citizens and has developed a few detached house projects under the ALION TERRACE brand.

Nomura Real Estate was founded in 1957 and one of the largest real estate developers in Japan.

At a start, it focused on developments of office buildings, but in 1964, they finished their first residential project in Tokyo. There are also a number of subsidiaries under its umbrella, all working in the real estate industry.

Except for building in Japan, they have also developed projects in Vietnam, Philippines and Thailand.

Their residential projects include both detached homes and high-rise apartments and condominiums, some of them listed below.

Nakano Corporation is one of the oldest and biggest real estate companies in Japan, established in 1885. It now operates as an international real estate developer based in Tokyo, Japan.

They have many subsidiaries working not only in Japan, but also in Singapore, the United States, Malaysia, Thailand, Indonesia and Vietnam. In total, they’ve completed around 1400 projects in 37 different countries which is impressive.

They’re known for developing large-scale residential, commercial and government, but not excluding hospitals, museums and schools.

Most of their upcoming projects are commercial or government building projects, and new residential projects in Malaysia and Singapore.

Tokyo Tatemono is one of the oldest and biggest real estate developers in Japan, founded in 1896. They own multiple subsidiaries in Japan and other countries in the world.

The head office of the Tokyo Tatemono is based in Tokyo, Japan, but they are currently developing projects in Myanmar, China, Singapore, and a few other countries.

The above listed developers are some of the best when investing in an established project, but what if you want to build a house on a plot of land for example? For this, you need a you need a well recognized home builder.

Daiwa House Group is the leading homebuilder in Japan, offering a wide range of construction services to landowners, commercial and industrial investors. It’s based in Osaka and owns around 90 subsidiaries working the in real estate sector. It was founded in 1955 as a construction company.

Not only do they operate in Japan, but also in the Philippines, United States, China, Australia, Vietnam, Malaysia, Mexico, Myanmar and Thailand.

Most importantly to many, they also develop condominiums and offer condominium management services.

The price of the custom-built house depends on the design and land area. You can choose from different floor plans.

Want to buy property in Japan?

2 Responses to “Top 10 Property Developers in Japan: A Complete Guide”