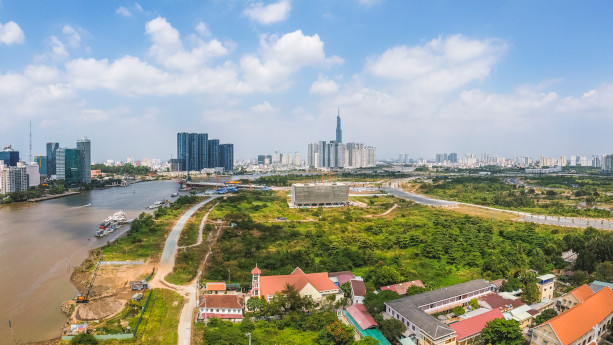 Vietnam has become a new hot-spot for multinationals to set up manufacturing operations and to diversify production from mainland China. The country sees some of the strongest economic growths in Asia along with a young workforce, growing middle class, and strong urbanization.

Buying real estate in Vietnam can be a bit tricky though, especially when it comes to land acquisitions. This is common in most other Southeast Asian countries where states have imposed restrictions on foreign ownership rights.

As the interest in land purchases grows in Vietnam, I decided to write this article where you learn the basics of ownership rights of the land, information about land prices, the taxes you have to pay, and more.

Can foreigners buy land in Vietnam?

Foreigners cannot own land on a freehold basis in Vietnam, like in Malaysia and Japan, for example. Instead, we have to lease the land with a lease term of up to 50 years, sometimes with a possibility for renewal.

The reason for this is that all the land is owned by the Vietnamese people, but controlled by the state. According to the Vietnamese Land Law that came into effect in 2014, foreign individuals cannot own or rent land as we aren’t allowed to obtain land use rights.

The law also explains that foreign-invested companies can lease land from the government for generally up to 50 years (sometimes up to 70 years). This allows the entities to introduce projects on the land.

The treatment of foreign investors and Vietnamese citizens is different in the sense that Vietnamese can obtain the Land Use Rights on a permanent basis while foreigners can only lease the land for up to 50 years.

Worth mentioning is that you can get access to land on a freehold basis if you’re married to a Vietnamese spouse. Besides, even if you’re not allowed to own the land, you can own the physical structure, like a villa, if it’s built on the land.

Land prices and lease rates have increased significantly in the major cities in the past years. Looking at land prices in Ho Chi Minh City, we’ve seen prices increasing by around 3 times every decade since the early ’90s.

With the increased activity in Vietnam’s manufacturing industry, industrial land prices have seen price gains recently. This is particularly the case in Hanoi and Ho Chi Minh City. Hai Phong is also an upcoming city due to its importance as a port city.

To many people’s surprise, Hai Phong is the third-biggest city in Vietnam with around 2 million people, still greatly outperformed by Ho Chi Minh City and Hanoi in terms of population.

The city has the highest amount of supply and occupancy rate of land as well.

To give you a better overview of actual land prices in Ho Chi Minh City, I’ve included some examples from listings in different cities below.

Keep in mind that land prices increase much on an annual basis and that the location and development possibilities of the land highly impact the price.

In the city center of Saigon, prices have sometimes increased by around 10% to 15% in just a year’s time. In the outskirts, we’ve seen price increases of as much as 30%.

Below I have included a handful of listings for land up for sale in Ho Chi Minh City.

Considering the attractiveness and popularity of Thao Dien among expats and wealthy locals, I’m surprised that you can find land at such low prices.

Analysts believe that land prices will remain stable from 2020 – 2024 and the highest gains will most likely be seen at The highest price will be applied to land lots on Dong Khoi, Ham Nghi, and Le Loi streets in District 1.

Below I have included a couple of listings with land up for sale in Da Nang.

My An (Ngu Hanh Son District)

Hanoi serves as a cultural, political, and economic hub in Northern Vietnam and where land prices have increased impressively in the past decade. Below are a few examples of land plots sold in Hanoi at the moment.

As you can see, prices differ greatly depending on which district you buy and the type of land.

Below I have listed different taxes you have to pay when acquiring land in Vietnam. Keep in mind that the rates can change frequently and that you should seek professional advice before engaging in the Vietnamese real estate market.

The registration fee is similar to the stamp duties used in other countries and set to 0.5%. It’s multiplied by the complete property value and paid by the buyer. You pay this fee when you buy the property.

A Land Use Tax is charged that increased progressively from 0.03% to 0.15% per square meter and the land price. The price is determined by the state every five years.

Corporations pay an income tax of 20% since 2016 if a profit is made for the sale of real estate.

Corporations generally don’t have to pay VAT when they sell land, the end-consumer is usually obliged to do so. With that said, the seller oftentimes collects the VAT from the buyer and pays it to the tax office on behalf of the buyer.

The rate is currently 10%, but the state only charges a rate of 5% for state-subsidized houses/apartments.

Below I have included some commonly asked questions and our replies. If you have other concerns or if there’s anything you wonder about, feel free to write a comment below or send us an email.

Can Vietnamese citizens own land?

Vietnamese citizens can own land on a freehold basis as they can simply renew the title deed every other decade if they decide to. Foreigners, on the other hand, can only lease land through foreign-invested companies for up to 50 years at a time.

The Vietnamese don’t lose the ownership of land if they don’t renew the title deed, but they cannot sell the land or use it as collateral.

Can foreigners own agricultural land in Vietnam?

No, foreigners cannot own agricultural land in Vietnam as there are strict controls of foreign land ownership in the country.

Even in countries like Malaysia, where foreigners are allowed to own most land types, there are restrictions on the purchases of agricultural land.