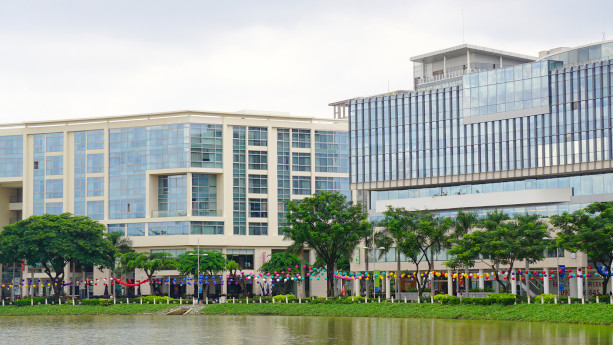 Investing in commercial real estate can be challenging and require much due diligence, especially in a developing country like Vietnam.

As office space or complete buildings can fetch tens of millions of US dollars in cities like Ho Chi Minh, learning about local regulations and how the market behaves should be your main priority at a start.

This typically requires that you work with an experienced local partner. In this article, we review how you can invest in office space and buildings in Vietnam.

Vietnam has comparably strict foreign property ownership regulations by Asian standards and we can generally only get hold of condominium units (strata-titled property).

In short, these are part of branded projects, not rarely built by foreign developers, with shared facilities and amenities. International property developers from countries like Singapore act as investors and co-develop residential projects together.

So if you want to buy other types of properties such as land or commercial real estate, you have to set up a local joint-venture or an entity that is permitted to trade real estate in Vietnam.

Even if places like Thailand have a limited amount of strata-titled office space that foreigners can own on a freehold basis, but you won’t be able to find any equivalent in Vietnam unfortunately.

Setting up a local real estate trading requires that you work with a credible company formation agency/lawyer that has experience in catering to foreigners. Luckily, there are many law firms available in Hanoi and Ho Chi Minh City that offer such services.

The general requirements when opening a real estate trading company are as follows:

Keep in mind that if you plan to build physical structures on commercial land, the facilities have to be by your business operations. For instance, you cannot build residential projects if you’re incorporated into a logistics company.

Vietnam has one of the fastest-growing economies in Asia and the office market is predicted to perform well in the coming years.

Looking at future developments, District 9 will absorb much of the supply in the coming years. District 9 is the biggest in Ho Chi Minh and has a strategic location in the Eastern parts, bordering manufacturing hubs like Dong Nai and Binh Duong.

Ho Chi Minh City attracts much investments and attention, a reason why its market has performed well. Occupancy rates have hovered above the 95% mark at the same time as rents increased by 4% annually.

Many claims that Vietnam will have the most promising office market in Asia and it wasn’t hit hard during the COVID-19 pandemic. In many Southeast Asian cities, we saw rental declines. In Hanoi, they remained stable and even increased in Ho Chi Minh.

On contrary to Thailand where Bangkok is the prime focus for investors in office space, Vietnam has a few more options. Office space is dense in the capital of Hanoi and the metropolis of Ho Chi Minh City.

Cities like Da Nang, Hai Phuong, and Can Tho also have a fair share of office space but aren’t as interesting as the above-mentioned cities. Let’s have a look at the most interesting cities to invest in office space in Vietnam.

Ho Chi Minh City is the biggest city in Vietnam with a population of more than 20 million.

The city contributes to around 30% of the domestic economy and most multinationals decide to set up operations here. Ho Chi Minh City has many districts and future supply and interest will primarily be dedicated to District 1, District 2, and District 9.

District 4, District 7, and Binh Thanh should also be of interest as much constriction is planned here.

Land prices have increased massively in District 1 in recent years, so it’s most likely not your best option if you look for more ‘affordable’ office space. We see a trend where companies move to more affordable areas and away from the central districts.

This is not only the case in Ho Chi Minh City but also in cities like Hong Kong and Tokyo.

If you’re a multinational that looks for office space/buildings that are integrated or in the vicinity of your manufacturing operations, District 9 could be of interest. Large-sized companies like Samsung and Intel all have facilities here and there are many hi-tech parks to be found.

Despite having a stock-exchange with a market cap that is less than 6% of Ho Chi Minh City’s, Hanoi is a key driver of the Vietnamese economy. The city is significantly larger than Ho Chi Minh City and its population almost as big.

Besides, as the government and related authorities and functions are located here, most foreign embassies are located in Hanoi. You see, being close to where strategic decisions are approved and creating strong ties with those in charge is an important aspect of doing business in Vietnam.

For more information about the different areas, I recommend you to read my separate article that explains how you can buy real estate in Hanoi as a foreigner. If you have any specific questions, you can also write a comment at the end of this article.

Da Nang is located in the central parts of Vietnam and currently the sixth biggest in terms of population.

Da Nang represents the economic engine of the central parts and acts as both a holiday destination as well as a commercial hub. You can various kinds of industries here, with a focus on the IT sector.

Hai Phuong, on the other hand, is located in the North and close to China. It’s the third-biggest city with a lot of manufacturing in heavy industry, including automotive. The city should also be of interest if you’re planning to invest in office space and buildings in Vietnam.

How can I find office space for sale?

Vietnam doesn’t have as developed a real estate market as Thailand. Although you can find companies agencies like CBRE and Savills here, the amount of agents is comparably limited.

Agents that you can have a look at include:

While many small/medium-sized agencies are established by foreigners who are multilingual in places like Bangkok, it’s not uncommon that agencies primarily focus on the local market in Vietnam.

A recommended option if you look for large-sized office space investments in Vietnam is to first find a credible partner. You should first learn about local buying regulations and the market, before making any commitments to a transaction.

While scrolling through listing websites can seem like an endless task, coming across outdated listings, you can save plenty of time by getting a handful of up-to-date objects at once.

This is something we can help with at Asia Property HQ as we work with some of the most reputable partners in the market. Simply fill in the form below for more information if you want to learn more