Vinhomes Central Park is probably Vinhomes’ most famous project and located in Binh Thanh. Here, you can find as many as 10 blocks ranging between 34-50 floors, 10,000 condo units, dozens of luxury villas, and Southeast Asia’s tallest skyscraper, Landmark 81.

The area has plenty of ground-level pools, the biggest river-side park in Vietnam, cafes, restaurants, and much more. Tourists travel from far away just to get a glimpse of the project, take photos of the majestic Landmark 81, and just spend a day in the grass.

Vinhomes Central Park is popular among expats and other foreigners thanks to its convenient location, many facilities and amenities, and high standards. The project is well-known for having many Korean expats, for example.

The units are modern, bright, and spacious, offering a high standard to residents. You’ll also have access to a balcony. 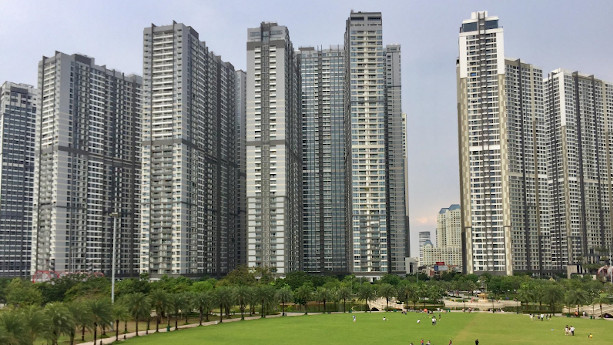 Vinhomes Central Park is one of the biggest mixed-use residential projects in Vietnam and residents have access to numerous facilities and amenities, including:

It’s one of the most popular areas where residents and the public can stroll around, have BBQ events, watch the Koi fish ponds, and play frisbee. It is also a popular venue to watch New Year’s fireworks.

At the same time, Landmark 81, which is the tallest skyscraper in Southeast Asia and located inside the development, won the award “The best high-rise building in Vietnam”.

Vinhomes Central Park is a massive project located just next to the Saigon River and a 5-minute drive away from District 2, including Thao Dien. From here, you can reach various restaurants, bars, shopping malls, hospitals, and other establishments within a close distance.

One of the greatest benefits of living in Vinhomes Central Park is that it’s an enclosed area but close to the most centrally located districts and a short drive away from Eastern Ho Chi Minh, a direction the city will grow towards the most in the coming decade.

It has the biggest river-side park in Ho Chi Minh where residents and the public indulge in various activities. A major attraction is also Landmark 81, of course, and where you can find everything from spas to offices.

Vinhomes is part of the large Vietnamese conglomerate, Vingroup, one of the most well-known companies in Vietnam. Vinhomes is one of the biggest real estate developers in the country and builds projects in 40 cities all over Vietnam, including cities like Hanoi and Da Nang.

Some of its other popular projects include:

The company was established in 1993 and has its headquarter in Hanoi. They don’t only have subsidiaries in real estate, but dozens of subsidiaries that operate in different industries, such as commerce, retail, agriculture, and healthcare.

They also operate more than 1,000 supermarkets in Vietnam, called Vinmart.

Previously, Vingroup was ranked as a top 10 property developer by the Vietnam Report Joint Stock Company. Not to forget, it was called the best developer in Vietnam by Euromoney Magazine.

For more information about the company’s projects, I recommend you to check my separate article where I list some of Vinhomes most popular projects in Vietnam.