One of the greatest benefits of owning an apartment here is that the new Metro line no. 1 (Ben Thanh – Suoi Tien) and the Ba Son station will be located just next to the project. Residents can enjoy numerous facilities and amenities, including sports facilities, supermarkets, swimming pools, Jacuzzis, and more.

The project has premium facilities and comprises seven blocks that have a dark glass exterior, offering an astonishing view of Thu Thiem that is located just across the river. 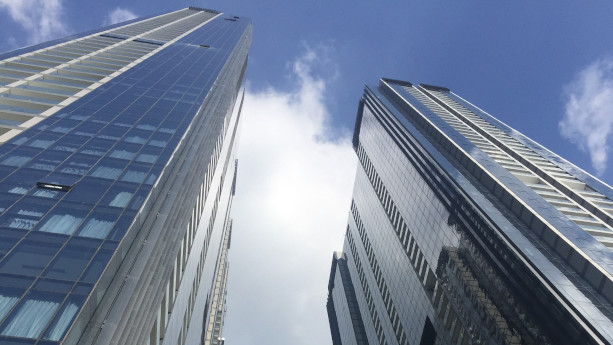 Vinhomes Golden River has both commercial and residential units, including:

For more information about the floor plans and the unit layouts, simply send us a message via the form at the bottom of this article, and then we will help you.

Vinhomes provides plenty of high-quality facilities and amenities to its residents, including:

Despite being an acclaimed and large-sized project right in the city center of Saigon, there’s no information regarding awards that Vingroup has won for this project.

Vinhomes Golden River is a premium and modern condominium project that is located right in between the CBD and Binh Thanh, thus, offering one of the best locations in Ho Chi Minh City.

The project is located right next to the Saigon River and you’ll reach many of Saigon’s most well-known landmarks and sites with a short distance from here, including Vinhomes Central Park, Bitexco Tower, Ba Son Historical Museum, and more.

Not to forget, the project is located just next to the new Metro line 1 (Ben Thanh – Suoi Tien) and Ba Son station. From here, you’ll be able to reach all the way to District 2 and District 9, reducing the transportation time significantly.

Even if Vinhomes Golden River is located close to the main road taking people from the busy District 1 to Binh Thanh and District 2, the project offers a tranquil and peaceful environment. It’s suitable for both families, couples, and singles alike.